Your soil test says "Warning, Warning "too much phosphorous." Don't use a fertilizer that contains phosphorous or manure for 3-5 years. The A&M soil test is at best faulty in its readings and recommendations especially related to soil phosphrous. If there are phosphorous problems in your soil, it's most likely that their fertilizer recommendations in the past are the culprits. Here's the whole story and the solution to the problem  - and it's organic, of course.

Back in the early 90's, a local extension agent called me about an upcoming change in A&M's fertilizer recommendations. Having finally acknowledged what the organic practitioners had known and been talking about for some time, the recently enlightened researcher's new advice was to use less fertilizer in general, considerably less nitrogen, no phosphorous and no potassium. Yes, it was the first 1-0-0 (nitrogen only) recommendation. 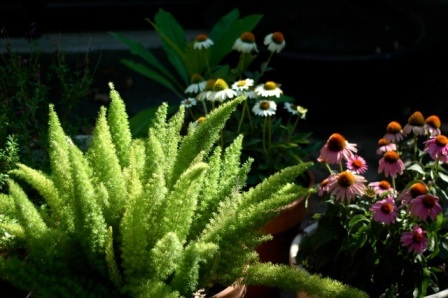 The alleged reasoning was that soil contained enough P & K. My first question was what are the fertilizer manufacturers and others vested in the often pushed 3-2-2 and 4-1-2 ratio products going to say? All I got was a smile and a shrug. It was good news to a degree. A&M was admitting that the long used recommendations had been poor, excess nutrients had contaminated the soil and because of the synthetic products solubility, the water tables, lakes and streams had been contaminated.

Without my knowledge, one of the Aggie wizards had contacted Malcolm Beck about the looming change and talked him into producing an organic version of the 1-0-0 idea. That was the birth of his company's 9-1-1 fertilizer. My warning on being careful to not waste your time went on deaf ears at the time and then the expected happened. The monumental change toward a more prudent fertilizer program died on the vine. Apparently those status quo guys had more power than those trying to make improvements.

The recommendation resurfaced in 2003. The 1-0-0 idea was again the rage, at least in the minds of those pushing the idea. This time the proponents lined up in agreement. Several companies had their versions of the "new" analysis ready to go. Their reason was different this go around. Now the alleged cause of the change was the fact that the soil has too much phosphorous and none is needed in the fertilizer applications. Potassium had been eliminated again. Just collateral damage I suppose.

As had been briefly mentioned in the early 90's, getting a soil test before you bought fertilizer was advised, but what you should expect to find from the soil test report is that a 1-0-0 ratio nitrogen only fertilizer is probably the product to use.

A friend of mine has been in on this conversation longer than I had. K. Chandler had been warning the educators, researchers and farmers that not only were the recommended solutions wrong, more importantly the premise was wrong. K. had been trying to explain to those involved with the A&M soil test lab that the new recommendation based on their test was wrong. The A&M soil test was a one of a kind at the time. No other testing lab in the country used this particular harsh acid extraction procedure.  Its fault was that it breaks the soil down completely which shows the total nutrient content of the soil but gives no information at all about the availability of those nutrients to the plants. Today they use a slightly weaker acid, but it is still a bad test. K. discovered this problem while struggling with the accuracy of his own soil tests at TP&SL. He also did plant tissue tests and could never get his soil tests and tissue tests to calibrate. Then it dawned on him. How do plant roots extract nutrients from the soil? They use carbon dioxide and carbonic acid, a weak extraction acid as opposed to the harsh A&M choice. Now his tests calibrated and since then his fertilizer recommendations have been far more helpful to growers. TP&SL's tests are still the best today.

How do the two stories relate? Most of the soils showing high levels of phosphorous in the A&M test show moderate to low levels of P being available to plants in the TP&SL report. Another problem with the A&M lab test is that it does not report on organic matter. As most of you already know, organic matter and carbon are essential to biological activity and nutrient availability. A&M used to stamp your report with red ink from a rubber stamp if you specifically request organic levels to be included, now they don't even do that. You get a mental image of dart boards being involved in the production of this data.

Some soils do actually have high amounts of phosphorous, but the answer is not an unbalanced, carbon free, trace mineral lacking, harsh, synthetic, nitrogen-only, salt product such as 24-0-0. Fertilizers with only nitrogen will show some artificial results when first used and then harm the soil and plant growth severely long term. Even high phosphorous soils need some P and also K in the feeding program.

On the other hand, the best way to release the tied-up P in the soil is to use compost-based fertilizers, aerated compost tea, molasses, humate, Garrett Juice and low application levels of sulphur.

Corn gluten meal has been mentioned as a 1-0-0 analyzed organic fertilizer, but it really isn't. The true analysis of corn gluten meal is about 10-1-1 or slightly less.