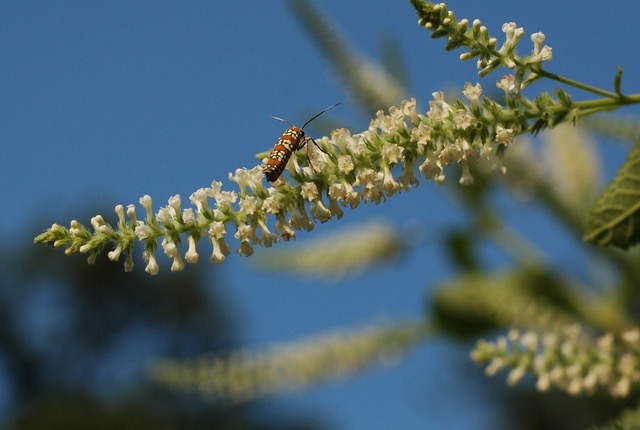 It was formerly known under the scientific name Atteva punctella. This small, very colorful moth looks like a true bug or beetle when not in flight, but in flight it resembles a wasp.

It is thought to be native to South Florida and the American tropics (south to Costa Rica), which were the habitat of its original larval host plants: the paradise tree (Simarouba glauca) and Simarouba amara.

Another tree called tree-of- heaven (Ailanthus altissima), originally from China, has been widely introduced and naturalized. Our pretty moth has been able to adapt to this new host plant, giving rise to its common name, the "ailanthus webworm".

Ailanthus, common name "tree of heaven", is considered an invasive species, although it is still sold by nurseries as a yard plant, mainly because it is one of the species that will grow in polluted or otherwise difficult places. Atteva aurea can be a minor pest in nurseries, although it rarely does serious damage. 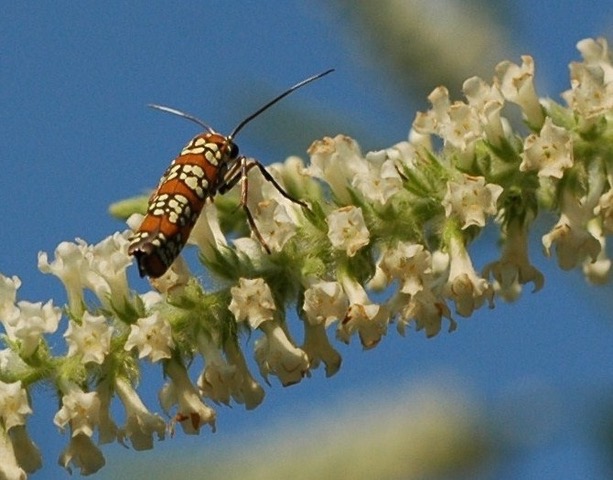 Larvae of ailanthus moth produce nests on the host plant by pulling two or more leaflets around a network of loose webbing. Then they consume the leaflets and bark. The caterpillars have a wide, light greenish-brown stripe down their backs and several thin, alternating white and olive-green stripes along their sides. The range of colors is from light brown to dark black.

The adult moth visits flowers and is an excellent pollinator. The life cycle from egg to egg can happen in 4 weeks. Larvae can be found from mid-spring to a hard freeze. There may be many generations each summer, with eggs being laid on the webs of other larvae. This can result in a communal web, having multiple generations from egg to various larva instars to pupa. Mating happens in the mornings, with egg-laying apparently happening in the evening. Eggs are found individually, not inclusters, even though each web may contain many separate eggs.