Johnny Appleseed, born John Chapman (September 26, 1774 – February 18, 1845), was an American pioneer nurseryman who introduced apple trees to large parts of Ohio, Indiana, and Illinois. He became an American legend while still alive, largely because of his kind and generous ways, his great leadership in conservation, and the symbolic importance of apples.

As a citizen of our young nation, Chapman enjoyed the fruit of the apple trees brought to America by earlier colonists. He saw the need for apple trees in the west as Americans moved beyond the boundaries of eastern towns to settle the wilderness that would become Ohio, Illinois, and Indiana.

At the turn of the century, Chapman ventured beyond the borders of established towns carrying apple   seeds from Pennsylvania cider presses to create nurseries in the wilderness. Fellow frontiersmen dubbed him Johnny Appleseed. 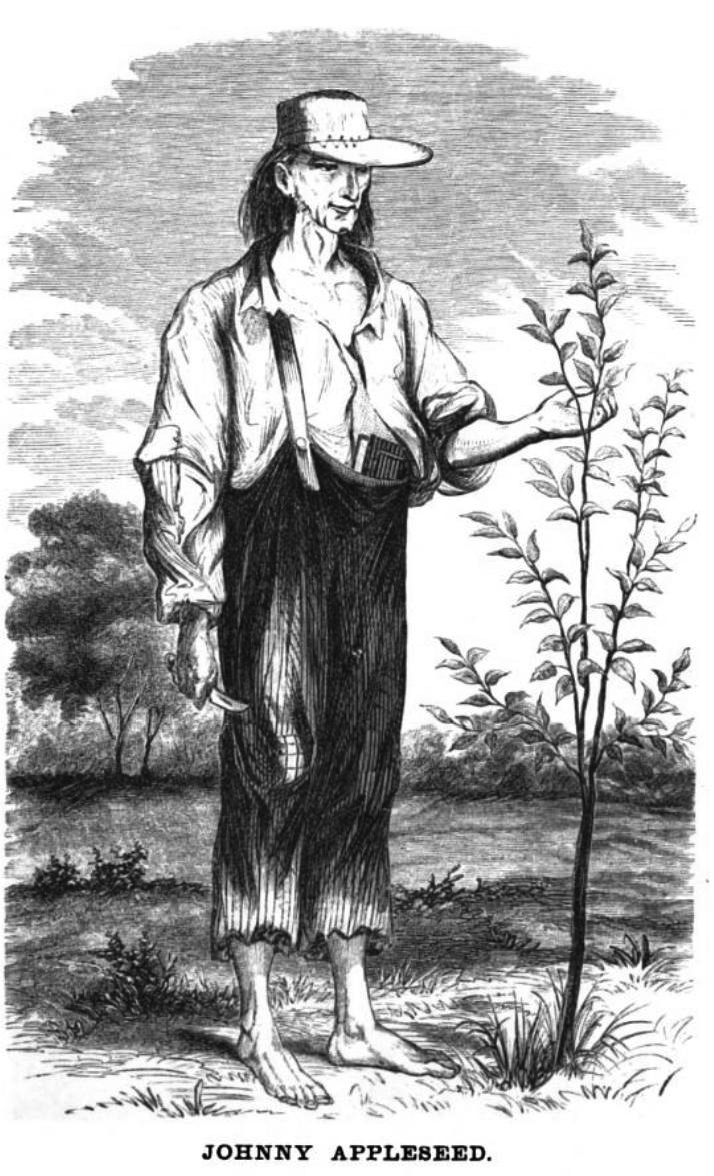 The only surviving tree planted by Johnny Appleseed is on the farm of Richard and Phyllis Algeo of Nova, Ohio. Some marketers claim it is a Rambo, although the Rambo was introduced to America in the 1640s by Peter Gunnarsson Rambo, more than a century before John Chapman was born. Some even make the claim that the Rambo was "Johnny Appleseed's favorite variety", ignoring that he had religious objections to grafting and preferred wild apples to all named varieties

In his legendary travels, he negotiated disputes between pioneer settlers and American Indians and shared his religious beliefs with anyone who wished to listen. His purpose was not material gain. He often gave away his trees, and his peers painted a picture of austerity.

The picture of a raggedy man with a pot on his head walking barefoot as he scattered seeds may first spring to mind at the mention of Johnny Appleseed. Johnny Appleseed is also remembered for his gentle nature and generous spirit.

When Chapman died in 1845 in Fort Wayne, Indiana, his name and reputation were well known throughout the land.