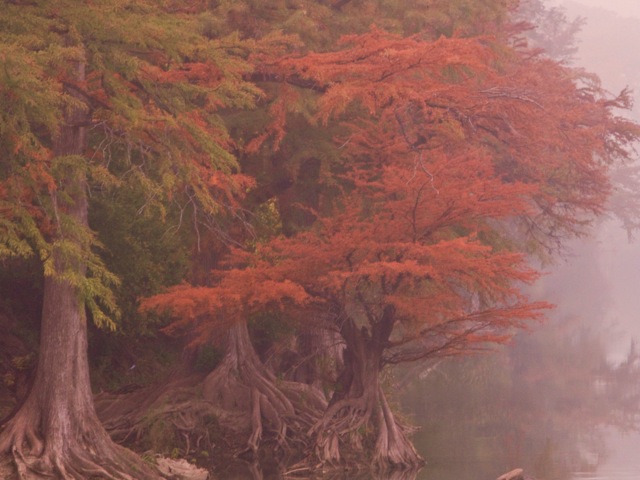 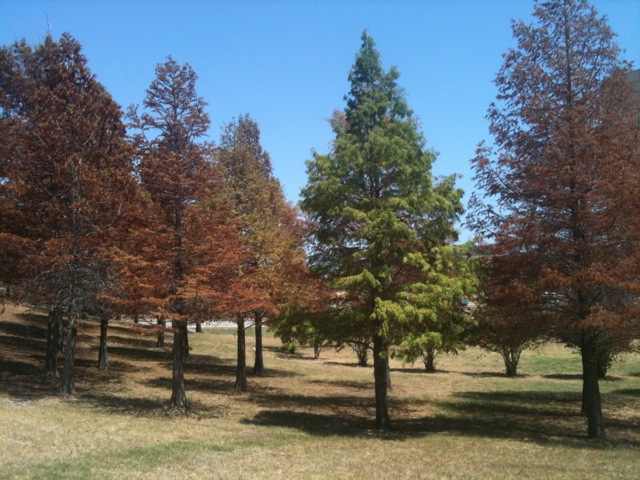 NATURAL HABITAT AND PREFERRED SITE:  Bald cypress is native to the Pineywoods, Gulf Prairies and Marshes, Pots Oak Savannah, Rio Grande Plains and Edward’s Plateau. It will adapt to a wide range of soils from sandy to heavy clays. Depending on the seed source, it may not grow well in black and white and other alkaline soils. See PROBLEMS below for more details.
IDENTIFICATION INFORMATION:  Bald cypress is a deciduous conifer that grows in a dramatic upright form, usually a strong central stem, pyramidal when young but spreading with age. Foliage is light green, lacy in texture and has reddish-brown fall color. The branching structure is layered and distinctive. Root “knees” appear especially in wet soil.
FLOWERS AND FRUIT:  3 to 5 inch male cones March through April in drooping clusters, few female cones at branch tips in the spring. Fruits are wrinkled, rounded cones about one inch maturing in the fall. 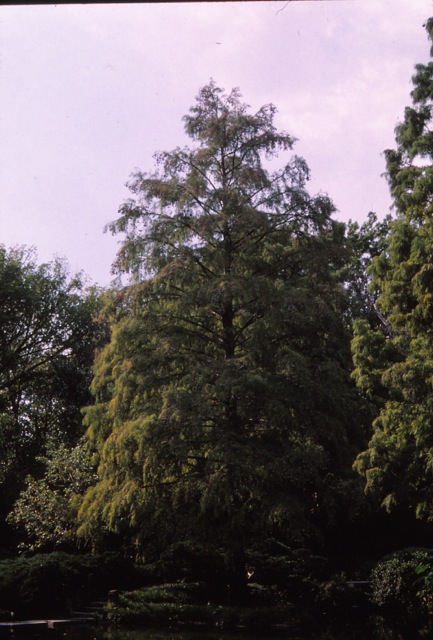 CULTURE:  All of the bald cypress trees are easy to grow in a wide range of soil. They can grow in wet soil or in water but can also do well in normal garden soil and moisture. Some growers have found bald cypress to be quite drought tolerant. Medium growth rate under moderate to little fertilization. 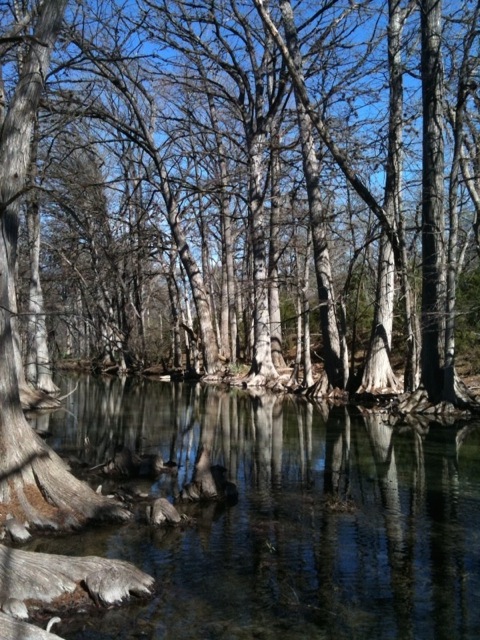 PROBLEMS:  Chlorosis (mineral deficiency) can be an issue when this tree is planted on top of white limestone rock in shallow soils. Bald cypress trees propagated from trees growing in acid soil conditions will struggle in alkaline soils. This same tree propagated from trees growing in alkaline conditions will grow well in most any soil. The difference is why you see beautifully healthy bald cypresses in Texas and other high pH soils and other bald cypress trees that are yellow, sick and not growing. Crown gall, spider mites, and bagworms will also attack these stressed trees. The Basic Organic Program will deter these pests, but the only long term solution is to purchase bald cypress that are bred to be happy in high pH, alkaline soils. It’s the responsibility of the growers. It’s buyer beware for home owners and developers. PROPAGATION:  Primarily by seed. Collect the seeds in late September when the cones have turned brown but haven’t shattered. Before sowing, soak the seeds in a 1% vinegar solution or in water just under the boiling point. Some books recommend a 1% lye solution. Bad idea. Garrett Juice would be the best treatment.
INSIGHT:  Montezuma cypress comes out earlier than this tree in the spring and holds its foliage longer in the fall. It also seems to be more salt tolerant. 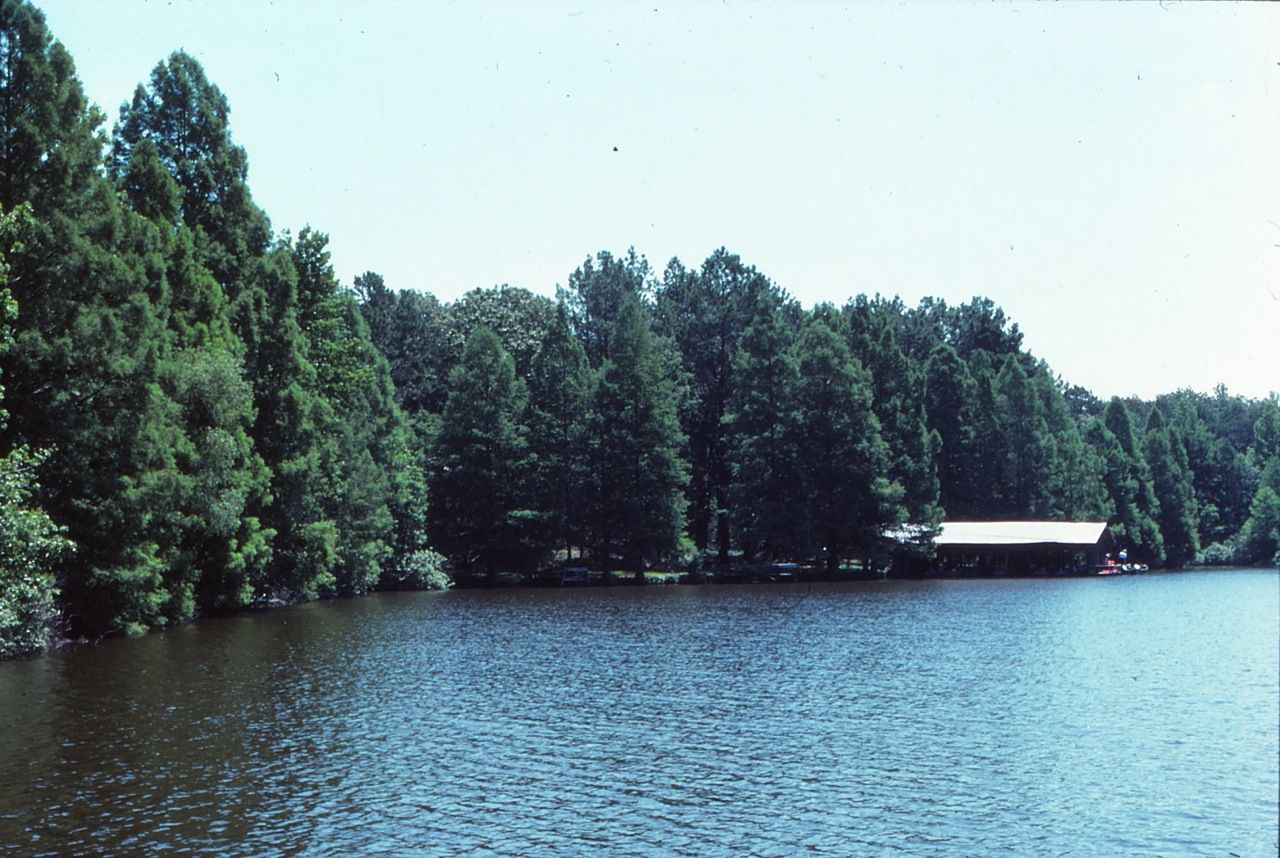 This is Pine Ridge Lake near Pittsburg Texas where I learned to ski. My Dad pulled us around in a circle with a small fishing boat. 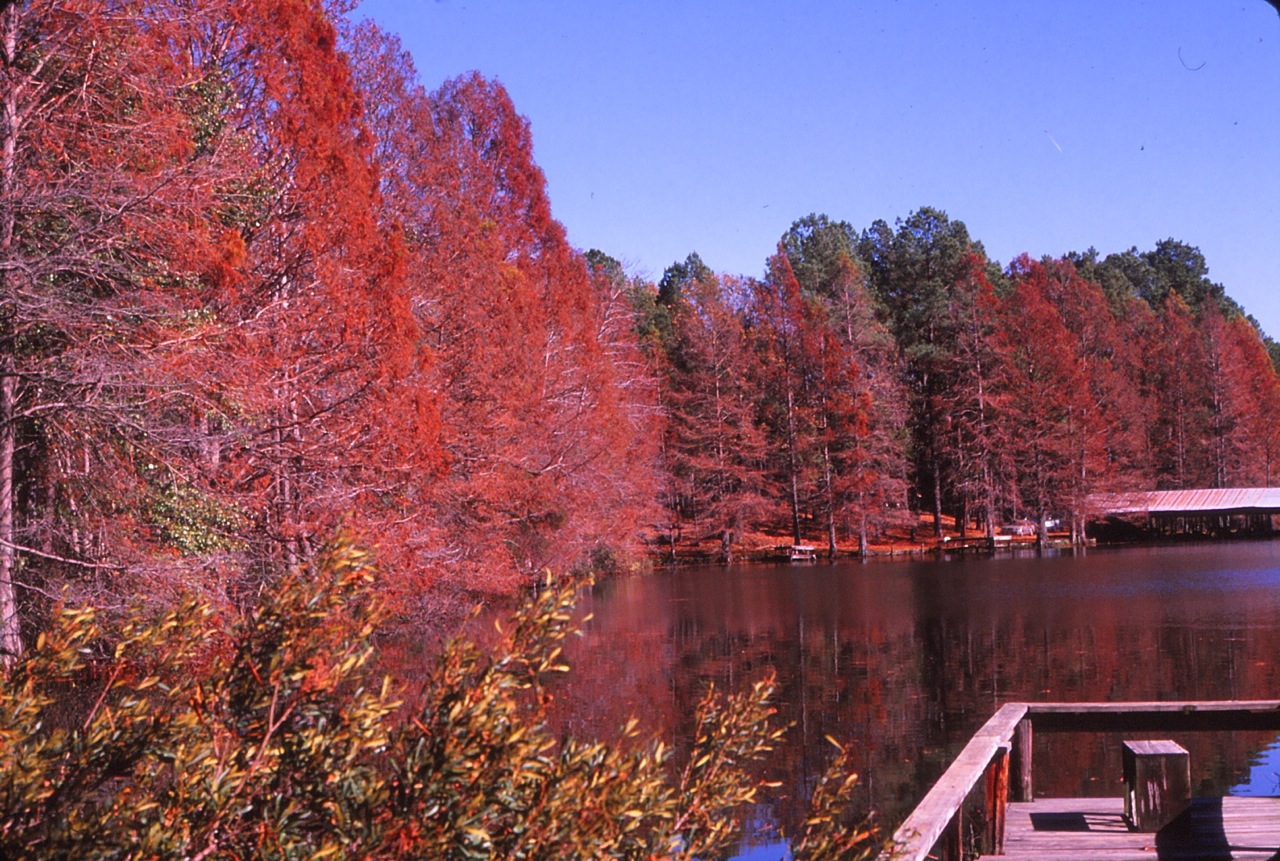 North Carolina tree that is at least 2,624 years old

There's a specific stand of bald cypress trees along the Black River in North Carolina that are some of the oldest trees in the country. Locally known as the Three Sisters Swamp, there are several trees in the group known to be more than 1,000 years old.

But researchers recently discovered a bald cypress (Taxodium distichum) in the swamp that's at least 2,624 years old. According to their study, published in the journal Environmental Research Communications, the discovery revealed bald cypress as "the oldest-known wetland tree species, the oldest living trees in eastern North America, and the fifth oldest known non-clonal tree species on earth."

(Non-clonal trees mean the trunk is the same age as the roots. Clonal trees originate from the same ancestor and often live for tens of thousands of years.)

According to the researchers, only individual trees of Sierra juniper (Juniperus occidentalis) at 2,675 years, giant sequoia (Sequoiadendron giganteum) at 3,266 years, alerce (Fitzroya cuppressoides) at 3,622 years, and Great Basin bristlecone pine (Pinus longaeva) at 5,066 years old are known to live longer than the Black River bald cypress.

To understand how old this tree really is, Smithsonian explains it was alive "when Nebuchadnezzar II built the Hanging Gardens in Babylon, when the Normans invaded England, and when Shakespeare first set quill to paper."

Lead author David W. Stahle, a University of Arkansas scientist, says, "It was like walking back into the Cretaceous. It was essentially a virgin forest, an uncut old-growth forest of 1,000 to over 2,000-year-old trees cheek to jowl across this flooded land."

Although the bald cypress trees are in a protected area owned by The Nature Conservancy, they are still imperiled by continued logging and water pollution, as well as sea level rise.

The researchers conclude: "To counter these threats, the discovery of the oldest known living trees in eastern North America, which are in fact some of the oldest living trees on earth, provides powerful incentive for private, state, and federal conservation of this remarkable waterway." 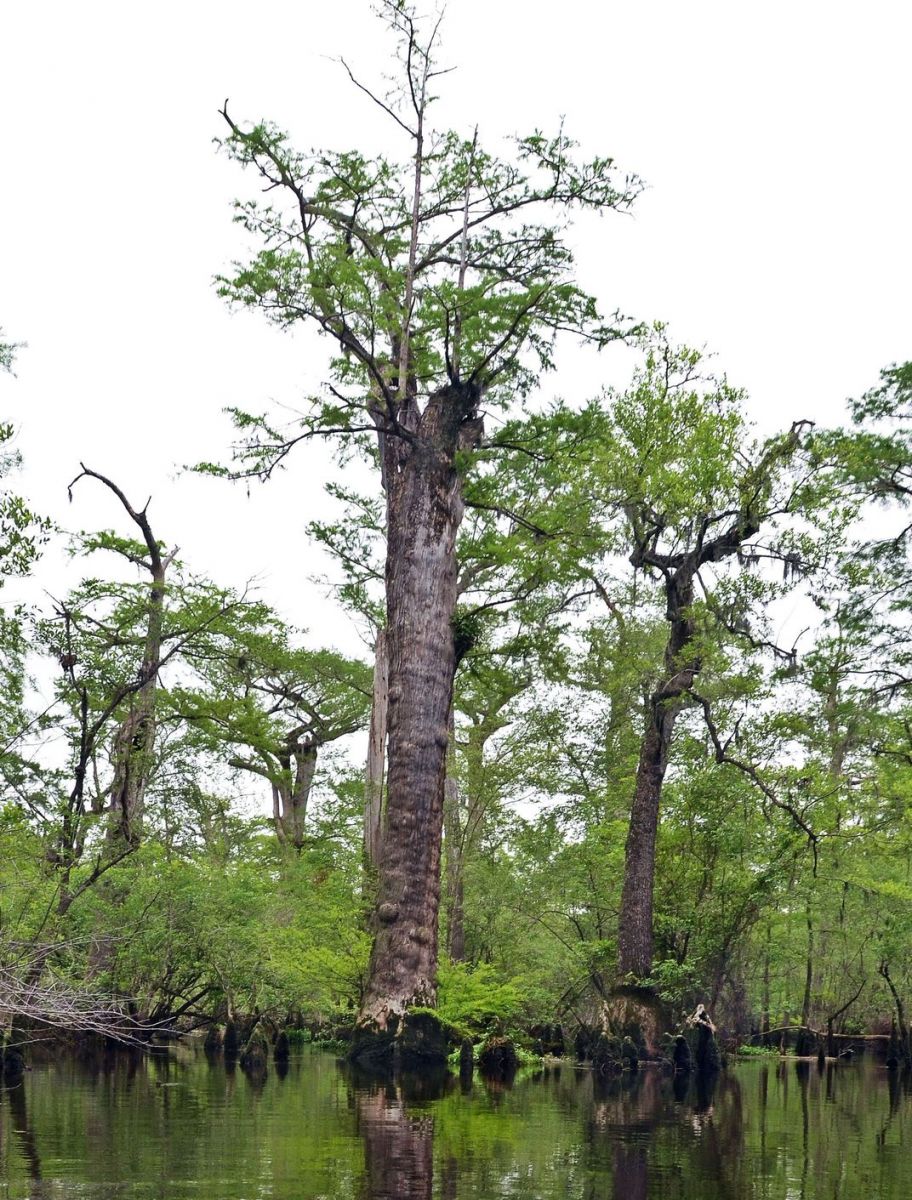 Title and abstract of original paper:

Abstract
Bald cypress trees over 2,000-years old have been discovered in the forested wetlands along Black River using dendrochronology and radiocarbon dating. The oldest bald cypress yet documented is at least 2,624-years old, making Taxodium distichum the oldest-known wetland tree species, the oldest living trees in eastern North America, and the fifth oldest known non-clonal tree species on earth. The annual ring-width chronology developed from the ancient Black River bald cypress trees is positively correlated with growing season precipitation totals over the southeastern United States and with atmospheric circulation over the Northern Hemisphere, providing the longest exactly-dated climate proxy yet developed in eastern North America. The Nature Conservancy owns 6,400 ha in their Black River Preserve and the North Carolina legislature is considering establishment of a Black River State Park, but ancient forested wetlands are found along most of this 106 km stream and remain threatened by logging, water pollution, and sea level rise.