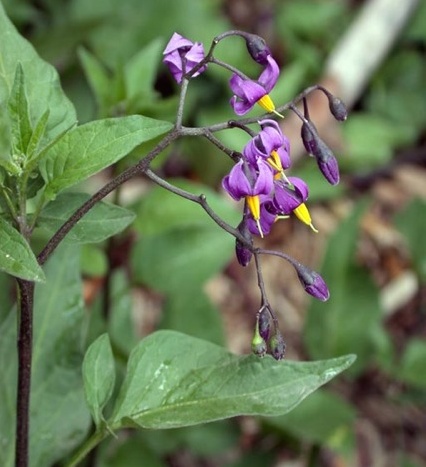 Also known as woody nightshade or European bittersweet, is a perennial vine or scrambling shrub with slender stems. Originally from Europe, it is now widespread throughout North America and commonly found in backyards, along edges of fields, vacant lands, roadsides, and along streams and wetlands where it thrives in moist soil and partial shade.
HABIT:  Perennial vine or sprawling shrub; lower stems woody, upper herbaceous branches die back each year. Flowers have star-shaped, purple, backward-pointing petals and stamens fused in a prominent yellow cone; grow in clusters along branches on short stalks extending out from the stems. Berries are round or egg-shaped and bright red when ripe with numerous yellow, flattened seeds; unripe berries are green. Leaves are dark-green to purplish and often with one or two small ear-like lobes near the base. Leaf blades are 1 to 4 inches long. Main root grows horizontally just below the surface and suckers frequently. Crushed leaves and bark have an unpleasant smell
NOTES:  Although this is not the same plant as deadly nightshade or belladonna (an uncommon and extremely poisonous plant), bittersweet nightshade is somewhat poisonous and has caused loss of livestock and pet poisoning and, more rarely, sickness and even death in children who have eaten the berries. Fortunately, bittersweet nightshade has a strong, unpleasant odor so most animals will avoid it, and poisonings from this plant are not very frequent.
The entire plant contains solanine, the same toxin in green potatoes and other members of the nightshade family. It also contains a glycoside called dulcamarine, similar to atropine, one of the toxins found in deadly nightshade. The toxin amount varies with soil, light, climate and growth stage. Ripe fruits are generally less toxic than the leaves and unripe berries, but even ripe berries can be poisonous.