Chemicals and Microbes in the News Newsletter

Chemicals and Microbes in the News

Interesting reports and it's nice that the press is doing stories about the life in the soil. Imprelis herbicide was the Poison of the Week on our website last year in July of 2011.

Click on this link to read the information from a year ago. 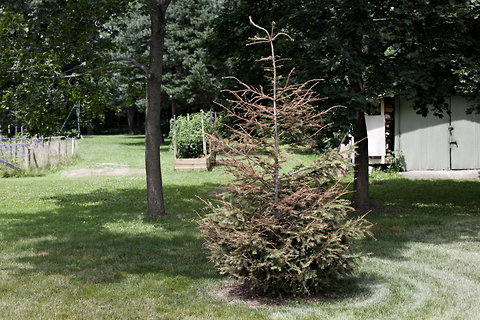 Andrew Spear for The New York Times. A dead evergreen, apparently killed by the herbicide Imprelis, in Janet and Robert DaPrato’s yard in Columbus, Ohio. The couple says they lost two trees last year and that two more have died since.

A year after it became clear that a new and highly touted lawn herbicide called Imprelis was killing and damaging many thousands of trees around the country, the manufacturer, DuPont, is busy processing claims for compensation.

Some 30,000 homeowners, golf courses, municipalities and landscapers have submitted claims. The formal deadline for submission was Feb. 1, but a few are still trickling in and being accepted. The process will probably be completed by the fall, DuPont officials say. Read More 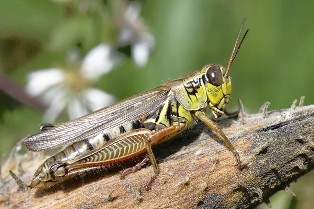 Chemicals in the bodies of frightened grasshoppers cause them to decompose. (Dror Hawlena )

The chemical composition of a dead grasshopper influences the microscopic processes below ground, study finds. And those chemicals are influenced if it's not at peace.

The next time you kill an insect, you might want to do it quickly - for the sake of the environment.

New research shows that whether an animal lives in safety or is terrorized by a predator can change the biochemical trajectory of the local ecosystem where it dies. The findings point to an expanded role for both predators and prey in their local environments, and may affect which species conservationists believe are most important to keep around. Read More

If you have any questions on this newsletter or any other topic, tune in Sunday 8am -11am (CT) to the Dirt Doctor Radio Show. The phone number for the show is 1-866-444-3478. Listen on the internet or find a station in your area. Organic Club of America

Please share this newsletter with everyone in your address book and all of your friends on Facebook and Twitter to help me spread the word on organics.