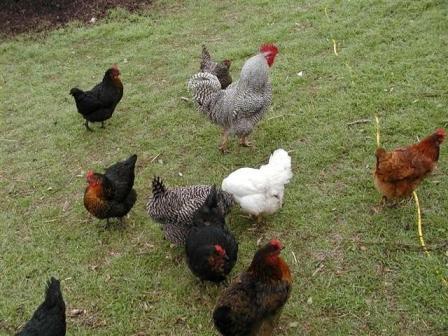 The chicken is one of the most common and widespread domestic animals. With a population of more than 24 billion in 2003, there are more chickens in the world than any other bird. Humans keep chickens primarily as a source of food, with both their meat and their eggs consumed.

In the U.S.A., Canada and Australia, adult male chickens are known as roosters; Males under a year old are cockerels. Castrated roosters are called capons (though both surgical and chemical castration are now illegal in some parts of the world).

Females over a year old are known as hens, and younger females are pullets. In Australia and New Zealand (also sometimes in Britain), there is a useful generic term chook (rhymes with "book") to describe all ages and both genders. Babies are called chicks, and the meat is called chicken.

"Chicken" was originally the word only for chicks, and the species as a whole was then called domestic fowl, or just fowl.

Chickens can make good companion animals and can be tamed by hand feeding, but — roosters, particularly — can sometimes become aggressive. Some have advised against keeping them around very young children. 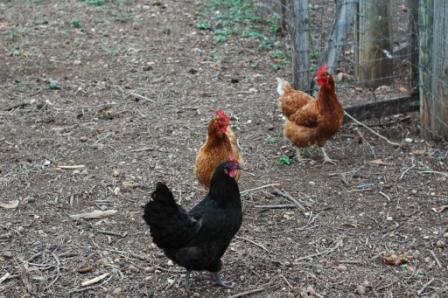 While some cities in the United States allow chickens as pets, the practice is not approved in all localities. Some communities ban only roosters, allowing the quieter hens. A general requirement is that the birds be confined to the owner's property, not allowed to roam freely. There may be strictures on how far from human dwellings a coop may be located, etc..

Chickens are generally low-maintenance. The major challenge is protecting the birds from predators such as dogs, raccoons and foxes. A bird left out at night is likely to be killed by a predator. Chickens are usually kept in a roost at night and a pen in the day (unless they are free-range). The floor is covered with bedding such as straw or wood shavings, which, with the high-nitrogen droppings, can go into a compost pile. Compost used on the floor is even better.

Raising chickens is a great idea because the eggs from birds that are eating a natural diet of bugs, manure, weeds, etc. are for more nutritious and healthy that the factory farm production eggs.