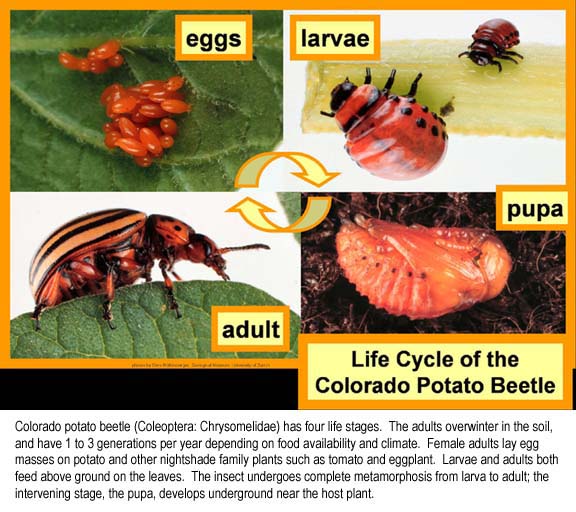 The adults three-lined potato beetle (Lema trilineata), also called old fashion potato beetle, feeds on potato plants and eggplants. The eggs are similar to Colorado potato beetle eggs in size, color and shape. They exude frass that looks like brown saliva out the top of their back, if disturbed, they convulse their bodies to rid themselves of the frass mass and quickly crawl away. When they start feeding again they produce more frass. When the larvae reach maturity, they fall to the soil. Within a few minutes the fire ants come and dig around them as if to make them comfortable, then the fire ants cover the larvae with small dry sticks. The dry sticks absorb the saliva type frass like a sponge, when the saliva frass seems to be drying on the sticks the ants carry it all to their mound. The larvae are now clean and shiny. Then ants cover the larvae with soil and larger sticks and the larvae spins a thin silken cocoon, pupates and eventually emerges as an adult beetle. Fire ants like this fluid frass as food but they can’t carry it. It’s like trying to carry jello with a pair of tweezers so they sponge it up with dry sticks.