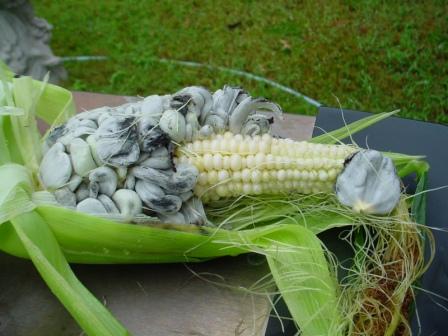 Considered a pest in most of the United States, smut feeds off the corn plant and decreases the yield. Usually smut-infected crops are destroyed. Some farmers may also choose to prepare corn silage out of the smutted corn. However, in Mexico corn smut is called huitlacoche (sometimes spelled cuitlacoche), a Nahuatl word reportedly meaning raven's excrement. It is considered a delicacy, even being preserved and sold for a higher price than corn. For culinary use, the galls are harvested while still immature — fully mature galls are dry and almost entirely spore-filled. The immature galls, gathered two to three weeks after an ear of corn is infected, still retain moisture and, when cooked, have a flavor described as mushroom-like, sweet, savory, woody, and earthy. Flavor compounds include sotolon and vanillin, as well as the sugar glucose.

Q:   I found this ear of corn in my garden and I am not sure what could have caused this. All of the rest of the ears are growing normally. This is the first time I have grown corn but I have been organic sense the 80’s thanks to you. J.K.,  Fort Worth, TX

A:  You have a fungus that is also considered a delicacy. Corn smut is called huitlacoche and sometimes spelled cuitlacoche). It is often preserved and sold for a higher price than corn. For culinary use, the galls are harvested while still immature. Mature galls are dry and almost entirely spore-filled. The immature galls are edible. They are gathered two to three weeks after infection is seen. They are moist and have mushroom-like texture and flavor. If you don’t want to deal with it, just throw those ears away.