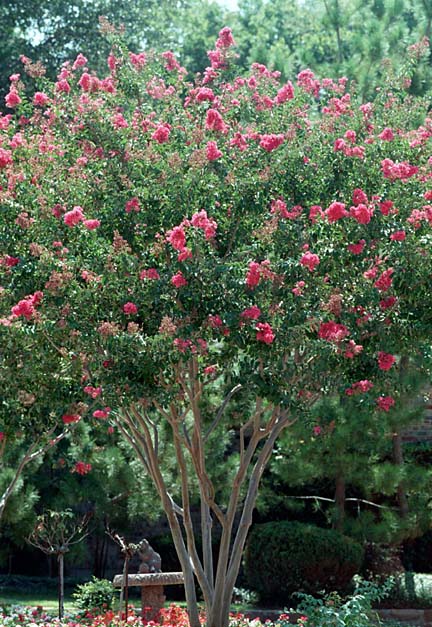 NATURAL HABITAT AND PREFERRED SITE:  Crape myrtle is native of the tropics from Asia to Australia but has adapted extensively in many parts of Texas especially the southern two thirds of the state. Needs full sun.

IDENTIFICATION INFORMATION:  Crape myrtle is a beautiful ornamental tree that is upright to spreading with light, smooth bark and small, oval, opposite leaves. It has showy color for most of the summer, and excellent fall color is red on all crape myrtles except the white flowering varieties which have yellow autumn leaves. 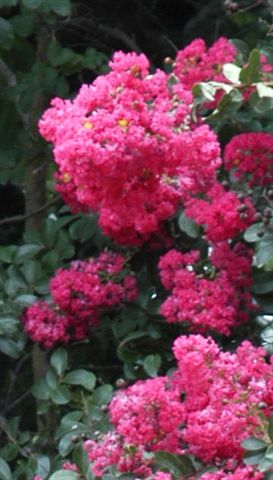 FLOWERS AND FRUIT:  Flowers are lacy, showy and have a multitude of colors and shades. Flowers are followed by decorative seed pods on the terminal growth. These fruit or capsules are oval and about 1/3 of an inch long. The seeds have a winged top.

BARK:  Bark is even smooth and ranges in color from pinkish to reddish and even grays. It is thin and exfoliates to expose smooth and pale-colored new bark.

FOLIAGE:  Small, alternate, deciduous leaves that are rounded at the base, generally 1/2 inch to 2 inches long.

CULTURE:  Crape myrtle is easy to grow in most any well-drained soil. Pruning can be done after the flowers fade to force a second burst of bloom. Pruning in the winter, which is often done, is not recommended. I like to leave these decorative seed pods in the winter. I think they are part of the beauty of this ornamental tree.

PROBLEMS:  Aphids, mildew and suckers are the biggest pests but they are more an irritation than a serious problem. When planted in the full sun, in healthy soil, under an organic program, crape myrtles have few problems. Florida wax scale will attack stressed trees.

PROPAGATION:  Seed or cuttings. Stem cuttings can be taken in the summer right after the first blooming period. The seed can be saved dry and planted in the spring in moist organic soil.

INSIGHT:  It is a severe misconception that pruning back crape myrtles in the winter increases the flower production the next year. This hacking back actually creates less flower production because the plant tries to first make up the growth that has been cut away before setting new buds and flowers. 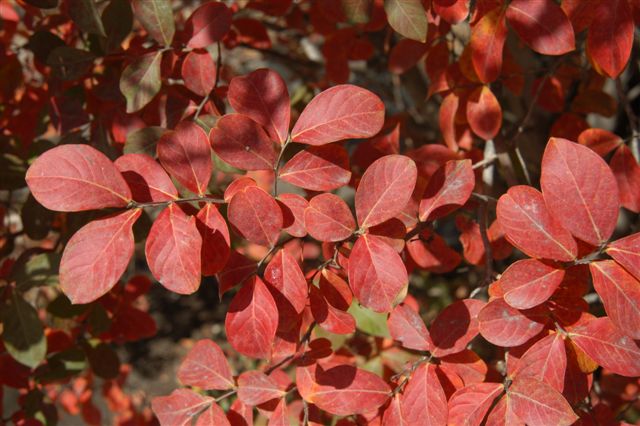 QUESTION:  My crape myrtles bloom from time to time but do not seem to be growing fast enough. What can I do to make them grow? Do you recommend Miracle Gro, or is that taboo? I have added horse manure to the front yard as I have many grass burrs. Is there something I can add to the manure to make it more effective? J.A. Arlington

ANSWER:  Miracle Gro is not acceptable in an organic program, but no fertilizer would help right now because the crape myrtle blooming season is nearly over. If you follow an organic program and don't let the soil dry out, the trees should bloom well next season. Fresh horse manure can be full of weed seeds and is strong enough to burn plants. Compost it first to eliminate problems.


QUESTION:  My neighbor has a beautiful crepe myrtle that hangs over my driveway. Sap drips all over my car that is sticky and hard to clean off the window. Someone said it might be a bug that is on the tree causing the sappy like stuff to come down? Do you know what this could be and how I can stop the sap? My neighbor is willing to work with me on this. A.R., Dallas.

ANSWER:  The dripping is the waste or "honeydew" of small insects called aphids or plant lice. They can be temporarily eliminated with strong sprays of anything, including water. Compost tea with orange oil or other plant oil products added to the water works better of course. The strong spray rips the pests off leaving their mouth parts still stuck in the plant tissue killing most of them. But, they will come right back unless the stress in the trees that brought them on in the first place is removed. Stress in the plant can be caused by too much or too little water, too much or the wrong kind of fertilizer, soil compaction, and soil contamination caused by herbicides and other toxic chemicals. One of the most common causes of stress in trees is deep planting. Make sure the tree is not too deep. The root flare should be exposed and visible above the ground as shown in the photo below. You can remove the soil yourself if the work is done very carefully, it’s best to hire an arborist to remove the soil with the device called the Air Spade.


QUESTION:  I planted five crape myrtles using native clay soil, compost, lava sand, greensand and paver sand. I was told that the paver sand would help with drainage. Later, a man who gardens organically told me that using that much sand (about one-third of the planting mixture) would basically create concrete when it dried. I dug up the trees and replanted them with just compost and native soil. Would sand hurt crape myrtles? M.B., Granbury

ANSWER:  Nothing should go into the planting hole except the soil that you dug out of the hole. Putting amendments in backfill soil creates a kind of "pot" in the ground. This situation makes it difficult to avoid having too much or too little water around the plant's roots. Amendments should go on the surface of the soil around the tree, but paver sand should not be used for planting. 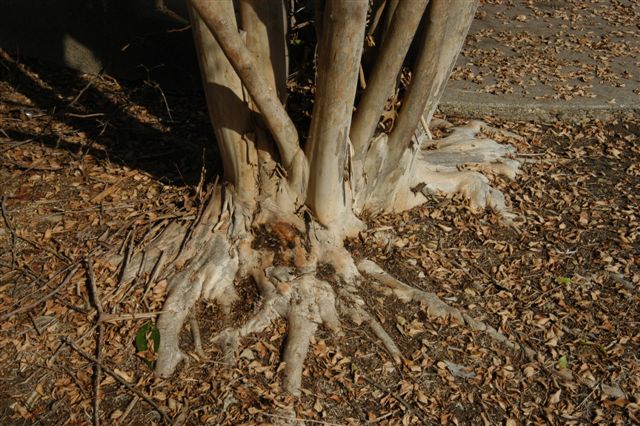 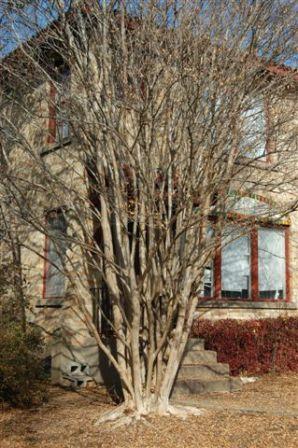 
QUESTION:  I discovered white bugs on the branches of our crape myrtle. One branch is covered in them and has turned black. When I attempt to scrape the bugs off, it leaves a red streak. The bugs look like oval discs attached to the branches and trunk. What is this? D.R., Dallas

ANSWER:  This is a scale insect that has been attacking crape myrtles. Use my Sick Tree Treatment and spray with a mixture of Garrett Juice and orange oil or horticultural oil (follow label directions).


QUESTION:  We have five large crape myrtles that are about 10 years old. Four have purple flowers, and the largest has white flowers. We recently noticed that where the white tree has been trimmed over the years there are small, egglike, white Styrofoam-looking capsules on the bark. When we mash these white capsules, they turn purple. We’ve also noticed small ants on the tree. M.N., Dallas

ANSWER:  The ants aren’t a problem. The capsules are scale insects, which can be killed by spraying a solution made with 2 ounces of orange oil and 1 ounce of Bio Wash per gallon of water.