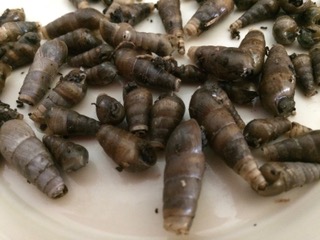 Rumia decollate is a predatory snail, imported from North Africa, and naturalized here in Texas and other parts of the country. It grows to 2 ½ “, has a long conical shell and feeds on the round-shelled garden snail. It burrows into the soil in hot and cold weather and prefers to feed on snail eggs and small hatchlings. The decollate snail usually does very little damage to crops unless plants are stressed and showing signs of decay and death. Decollates will feed on some low growing plants and germinating seeds, but they prefer dead plant material. Some people fear the release of non-native species, but they are already here. Heavy populations of these snails can be controlled with coffee grounds, crushed red pepper and the commercial product Sluggo.