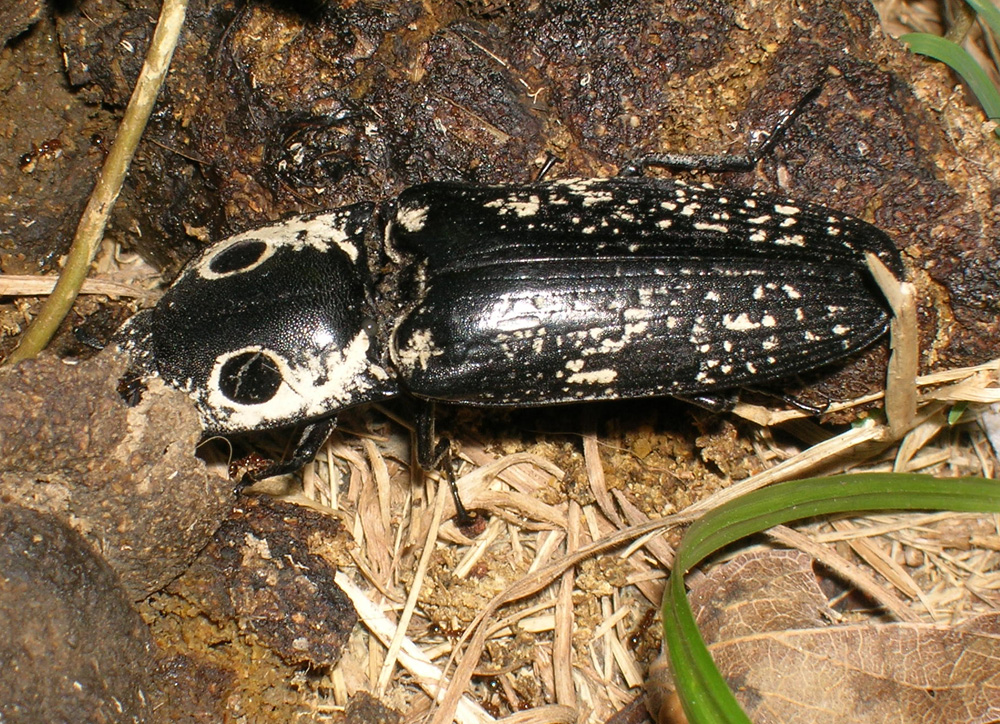 IDENTIFICATION: Size: Adults 1 - 2 inches; larva up to 2 inches long – the largest of the click beetles. The functional eyes are small,rounded and located on either side of the head just behind the antennae. Elongated black white spotted body’s pronotum two large oval patches of darker scales, framed in white. Common name of the beetle comes from these false eyes that are a defensive adaption to confuse or frighten predators. 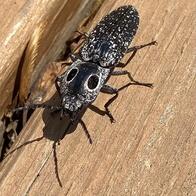 The Eyed Elater has a hinged joint between the head and thorax of its body. It allows the beetle to arch its back and then quickly snap the hinge, propelling the beetle into the air allowing it to flip over. Like all click beetles, A. oculatus is capable of suddenly catapulting itself out of danger by releasing the energy stored by a click mechanism, which consists of a stout spine on the prosternum and a matching groove in the mesosternum. The beetle flexes its back to "pop" itself as much as 6 inches into the air. It is the release of the spine from the notch that provides the sound effect.

HABITAT: Under logs and other dark, damp places.

ECONOMIC IMPORTANCE: Adult click beetles aren't of much significance to gardeners, but its larvae, the wireworms, are. Many of these larvae are pests that consume the roots of cereal crops, causing serious damage. Unlike its many cousins, the Eyed Elater larva is a meat-eater that dines on many other pest larvae, including those of wood-boring beetles, flies, and other undesirables. Adults feed on nectar, if they feed at all.

CONTROL: Larval stages are predators of various pest insects, healthy, biologically active soil is usually all that is needed.