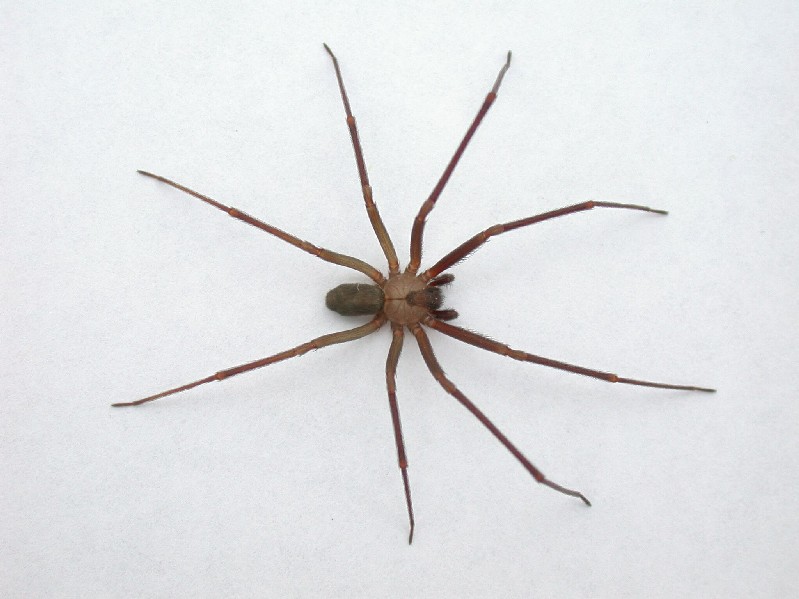 Identification: Adults are light brown in color and have very long legs. Females are larger than the males and have a distinctive dark brown violin shape on the back. They make irregular webs.

Biology and life cycle: Incomplete metamorphosis. Females produce one to five egg sacs with a total of 30 to 300 eggs that hatch in one month. Nymphs pass through eight instars (young forms resemble adults). Total life cycle is about one year. Adults can live from two to five years. They bite in defense when they sense pressure (in clothes or bedding).

Habitat: Under rocks, in loose papers, boxes, clothing, bedding, and shoes. Webs are used as a place to hide rather than to catch prey.

Feeding habits: They hunt at night and feed on various insects.

Economic importance: Brown recluse spiders help control several pest insects, but their bite can cause a serious wound and in rare cases the loss of a limb.

Insight: Bites don't hurt at first but become extremely painful later. There is no antivenin. Shake out clothes that have been on or near the ground overnight or hanging in the closet or garage for a long period. Brown recluse spiders are dangerous but clumsy. They don’t climb glass well but will often get curious about a glass container that is next too a vertical surface, venture down into the glass and get trapped.

One of my listeners sent an interesting report on brown recluse spiders. She has been trying to control them for 15 years and discovered that a similar looking spider actually kills the recluse. The good spiders have no fiddle on the back but do have black knobs at the joints of the legs. This report is apparently about the spitting spider. 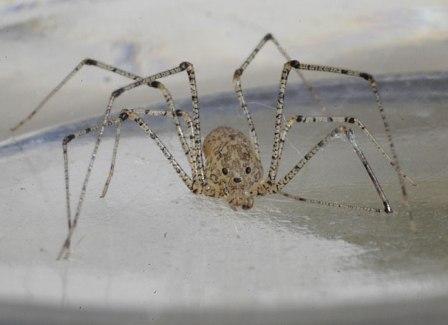 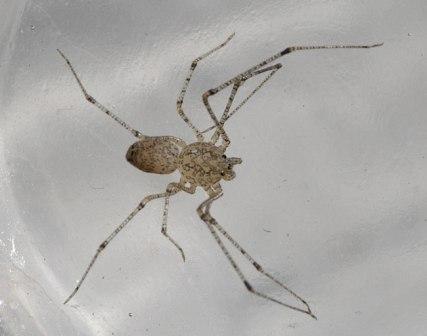 Range: The brown recluse spider and ten additional species of Loxosceles are native to the United States. In addition, a few non-native species have become established in limited areas of the country. The brown recluse spider is found mainly in the central Midwestern states southward to the Gulf of Mexico (see map). Isolated cases in Ohio are likely attributable to this spider occasionally being transported in materials from other states. Although uncommon, there are more confirmed reports of Loxosceles rufescens (Mediterranean recluse) than the brown recluse in Ohio. It, too, is a human-associated species with similar habits and probably similar venom risks (unverified).

The physical reaction to a brown recluse spider bite depends on the amount of venom injected and an individual's sensitivity to it. Some people are unaffected by a bite, whereas others experience immediate or delayed effects as the venom kills the tissues (necrosis) at the site of the bite. Many brown recluse bites cause just a little red mark that heals without event. The vast majority of brown recluse bites heal without severe scarring.

Initially, the bite may feel like a pinprick or go unnoticed. Some may not be aware of the bite for 2 to 8 hours. Others feel a stinging sensation followed by intense pain. Infrequently, some victims experience general systemic reactions that may include restlessness, generalized itching, fever, chills, nausea, vomiting, or shock. A small white blister usually initially rises at the bite site surrounded by a swollen area. The affected area enlarges and becomes red, and the tissue is hard to the touch for some time. The lesion from a brown recluse spider bite is a dry, blue-gray or blue-white, irregular sinking patch with ragged edges and surrounding redness--termed the "red, white, and blue sign." The lesion usually is 1½ inches by 2¾ inches or smaller.