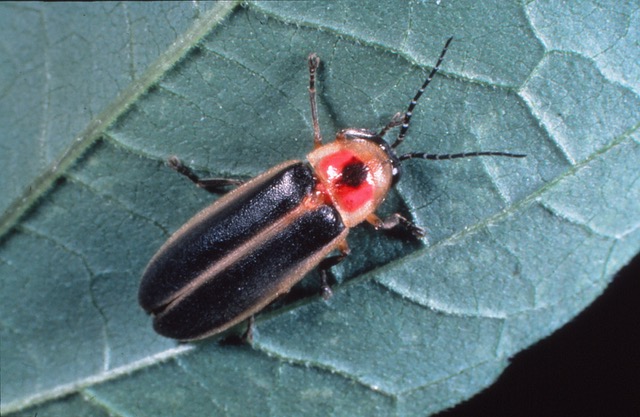 Size:  Adult--1/4" to 3/4" Identification: Small brown and yellow flying beetles that can make controlled flashes of light to attract mates. Head is concealed from above by the shield called the pronotum. Biology and life cycle:  Complete metamorphosis. Overwinter in the soil as larvae, emerge in the spring. Pupate in early summer. Two weeks later the adults emerge, flying around at night to show off; the females lay eggs just under the soil. The larvae hatch in about a month and feed till fall, when they burrow into the soil for the winter. In the summer the males signal while flying, and the females return the signal from perches on or near the ground. Feeding habits:  Firefly adults don't eat much of anything, but larvae are carnivorous. They eat other insect larvae, snails, and slugs. Insight:  Fireflies flash their lights on and off in a distinct pattern. Even the larvae and eggs glow; scientists have no clue about this since it obviously cannot relate to mating. In the adult stage they definitely add beauty and fascination to summer evenings. The larval stage is beneficial. They are meat eaters and dine mostly on young snails and slugs. There are about 130 species of fireflies in this country. In some species the female doesn't have wings. Some researchers claim that fireflies are less active when the moon is full.

Q:  I used to love watching fireflies in the summer. And then, one year, they disappeared. We’ve been organic gardeners for more than 10 years, but we still don’t see fireflies. How can we attract them to our yard? A.C., Dallas

A:  Stick with an organic program, and fireflies eventually will return. Many organic gardeners have reported good populations during the past several years. The health of the soil probably is the most important factor because that’s where immature fireflies live. Firefly larvae feed on and control slugs and other pests.