The most commonly grown ornamental species of Mirabilis plant, and is available in a range of colors. Mirabilis in Latin means wonderful and Jalapa (or Xalapa) is the state capital of Veracruz in México. Cultivated by the Aztecs for medicinal and ornamental purposes.

Flowers usually open from late afternoon (around 4'o clock) onwards then produce a strong, sweet-smelling fragrance throughout the night, then close for good in the morning. New flowers open the following day. It arrived in Europe in 1525. Today, it is common in many tropical regions and is also valued in Europe as a (not hardy) ornamental plant. 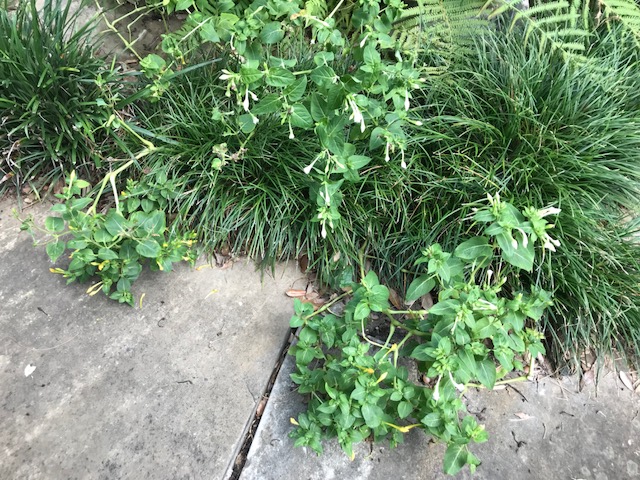 Culture: Easy to grow in sun or part shade in any soil but responds to healthy beds. In North America, the plant perennializes in warm, coastal environments, particularly in USDA zones 7-10. It grows preferably in light soil, rich in humus and well draining, it is neutral side acidity (pH). It is usually sown from mid-February to May. The seeds germinate rapidly in warm temperatures.

Uses: Summer color. The fragrance of the flower is more intense and noticeable during the warm period of the day.

Problems: Can develop into a weedy pest. The plant will self-seed, often spreading rapidly if left unchecked in a garden. Some gardeners recommend that the seeds should be soaked before planting, but this is not totally necessary

Notes: Mirabilis jalapa hails from tropical South America, but has naturalized throughout tropical and warm temperate regions. In cooler temperate regions, it will die back with the first frosts, but return the following spring from the tuberous roots. It is native to the dry tropical regions of Central and South America: Guatemala, Mexico, Chile and Peru. It is currently naturalized in many countries in Asia, Africa, United States, Middle East and, Europe.