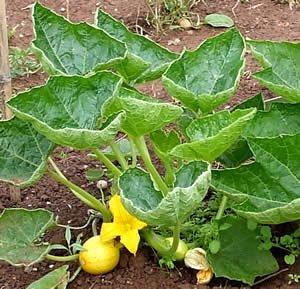 There's an easy home test to find out if your organic products are contaminated with persistent herbicides that are capable of damaging tomatoes, peas, beans, lettuce and several other crops. The contamination of the soil can last for years. The home screening method is called a bioassay which is a proven scientific method.

Compost testing - set up at least six 4-inch seedling pots or two flats and fill half of them with a sterile peat moss-based potting soil (this is the only time I recommend a peat moss potting soil). Fill the other half of the containers with a mixture of two parts of the compost you want to test and one part potting soil. Be sure to label for clear identification. Plant the containers with peas (in cool weather) or beans (in warmer conditions). If residues of pyralid herbicides are present, germination will be poor, and seedlings that do grow will show curled leaf edges.

Manure testing - plant seedling pots or flats with peas, beans or peanuts (the best choice) and let them grow for a couple of weeks. Mix a slurry of equal parts manure and water in a 5 gallon bucket or other container and let it sit for about an hour. Water half of the seedlings with the manure water and use just water on the other seedlings. If the manure is contaminated, symptoms will appear within a few days.

Mulch or Hay testing - use the same procedure as with manure testing, but soak the mulch, hay or other materials overnight before draining off the water.

In summer, you can pot up volunteer tomato seedlings from your garden to use as test subjects. Materials that turn out to be killer compost or murderous mulch should be reported to your local extension service, to the manufacturer of the product and to Richard Keigwin, director of the EPA’s Special Review and Re-registration Division (email keigwin.richard@epa.gov).

Dow’s clopyralid (still sold as Confront) was found to be the contaminant in compost that killed home garden and nursery plants in Washington, Pennsylvania and New Zealand. Aminopyralid, the active ingredient in common herbicides Milestone and Forefront, belongs to the same class of chemicals that includes clopyralid. Picloram is a similarly damaging product.

Tomatoes are highly sensitive; symptoms including curled, cupped leaves and wilting new growth are often misdiagnosed as a virus or disease problem. Here are good web sites to check out for additional information:
http://www.the-compost-gardener.com/picloram.html  http://www.gardenorganic.org.uk/organicgardening/herbicide_damage.php

Forward this newsletter to family and friends and ask them to
Sign Up for Howard Garrett's Newsletter.

If you no longer wish to receive the Dirt Doctor Weekly Newsletter,
click reply and put Unsubscribe in the subject line.