Pest Control Products to Use With Caution 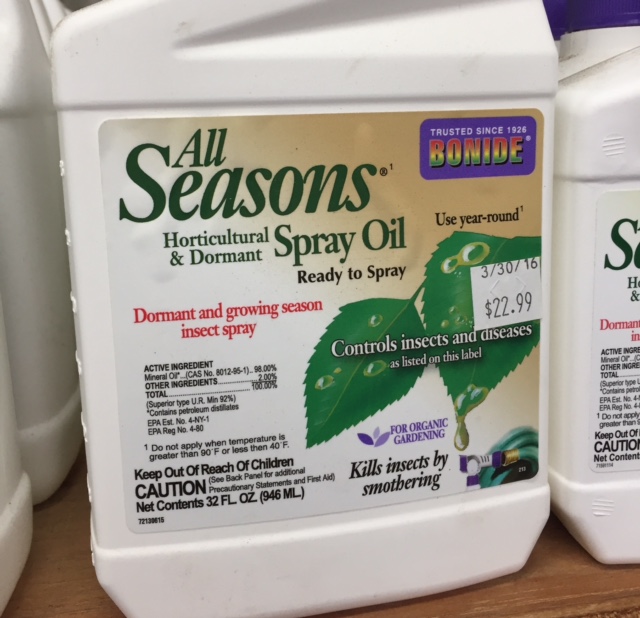 I’m often asked whether dormant oil is acceptable insect control and do I recommend its use. It’s a somewhat complicated answer. Oils sprayed in the dormant season are acceptable in an organic program; however, there are several “buts”. I rarely recommend them now and never use myself because they are non-selective and kill over-wintering beneficial insects as well as pests. With proper soil building and healthy plants resulting from the organic program, spraying to kill is rarely needed. If you have insect pressure serious enough to warrant dormant oil spraying, here’s more detail you need to know.

In the past, horticultural oils were heavier and used only when plants were not in their growing seasons (dormant). They were called dormant oils. The old oils killed pests that overwintered on woody plants, but were too heavy to spray on plants with foliage. The term dormant oil is still used, but now generally refers to the application time rather than the product. New, lighter formulations allow use during the growing season. These products, sometimes called summer, superior, or supreme oils, can control pests from spider mites to whiteflies.

Horticultural oils are safe to use around mammals, birds and reptiles but are toxic to fish. Applying oil in freezing conditions or extreme heat, or during drought or periods of new growth, can injure plants. Some plants, including maples, junipers, cedars and spruce are sensitive to these oils. Be cautious when using horticultural oils and apply them only as a last resort. They will potentially damage your plants and will definitely kill beneficial insects.

Types of various oils used to spray for plant pests:

Horticultural oil - a highly refined complex mixture of hydrocarbons containing traces of nitrogen and sulfur-linked compounds that is used to control plant pests. It is an acceptable alternative to control pests in organic farming, but horticultural oil usage is poorly understood since the product labels give little information on the content.

Dormant oil - was originally a less refined oil used for woody plants during the dormant season. Dormant oil now refers to the time of application rather than the characteristic of the oil.

Mineral oil - oil found in the rock strata. The white mineral oil is the tasteless petroleum used for pharmaceuticals or medicinal purposes.

Narrow-range oil - highly refined that has a narrow range of distillation.

Petroleum oil - same as horticultural oil and a more common term of reference in some circles.

Summer oil - refined oil used on plants when foliage is present as well as in the winter.

Vegetable oil - derived from the seeds of some oil seed crops.

Precautions when using horticultural oils:  To discuss this newsletter or any other topic, tune in each Sunday 8am - 11am central time to the Dirt Doctor Radio Show.The call-in phone number is 1-866-444-3478. Listen on the internet or click here to find a station in your area.

For years I recommended horticultural oil and insecticidal soap for sprays, and thought they worked equally well against all species. A recent article by Cliff Sadof of Purdue University and his graduate student, Carlos Quesada, in HortTechnology(October 2017, volume 27, page 618-624) shows me that I need to update my recommendation.

Carlos and Cliff did a series of lab and field studies on two armored scales (pine needle scale and oleander scale) and two soft scales (calico scale and striped pine scale). Oil and soap, both applied one time at 2%, killed 67-93% of crawlers of all four species; that’s a pretty good level of control. But both oil and soap became less effective as the scale insects settled comfortably and grew. Spraying oil or soap against adult scales was as good as spraying water. No surprises so far. The basic recommendation still applies: You need to spray against crawlers to achieve the best control.

Carlos and Cliff speculated that the difference arises from the chemical properties of the chemicals and the scale insects. Both oil and soap kill mainly by suffocation, but, chemically speaking, soap is polar (so it likes to stick to another polar object) and oil is non-polar (it is repelled by a polar object). As armored scale crawlers settle, they produce a waxy cover over their bodies within three days. Most soft scales, on the other hand, do not usually produce a thick wax layer until adulthood. Wax, being non-polar, reduces penetration of polar soap but allows penetration of non-polar oil. Skin of soft scales is polar, so soap sticks and penetrates the layer more effectively, thus doing a better job of killing soft scales.