Ladybugs, ladybird beetles and lady beetles are all the same beneficial insects – just different common names. The ladybug is considered the poster child of beneficial insects and there are hundreds of species. Since there is plenty of incorrect information about at least one of the many species of helpful insects, here’s a rundown all the main players in this category. 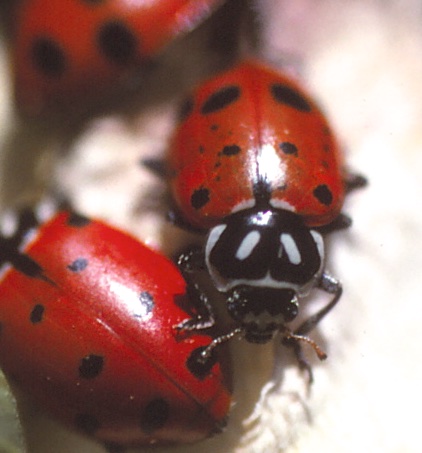 Convergent ladybug - Hippodamia convergens is one of our native ladybugs and the one that you will normally receive when buying from an insectary. Convergent lady beetle is among the most common lady beetle species throughout North America and is an important natural enemy of aphids, scale, thrips and other soft-bodied insects. It will also feed on pollen and nectar from flowers when prey is scarce. The common name comes from the converging white lines on the shield behind the head. 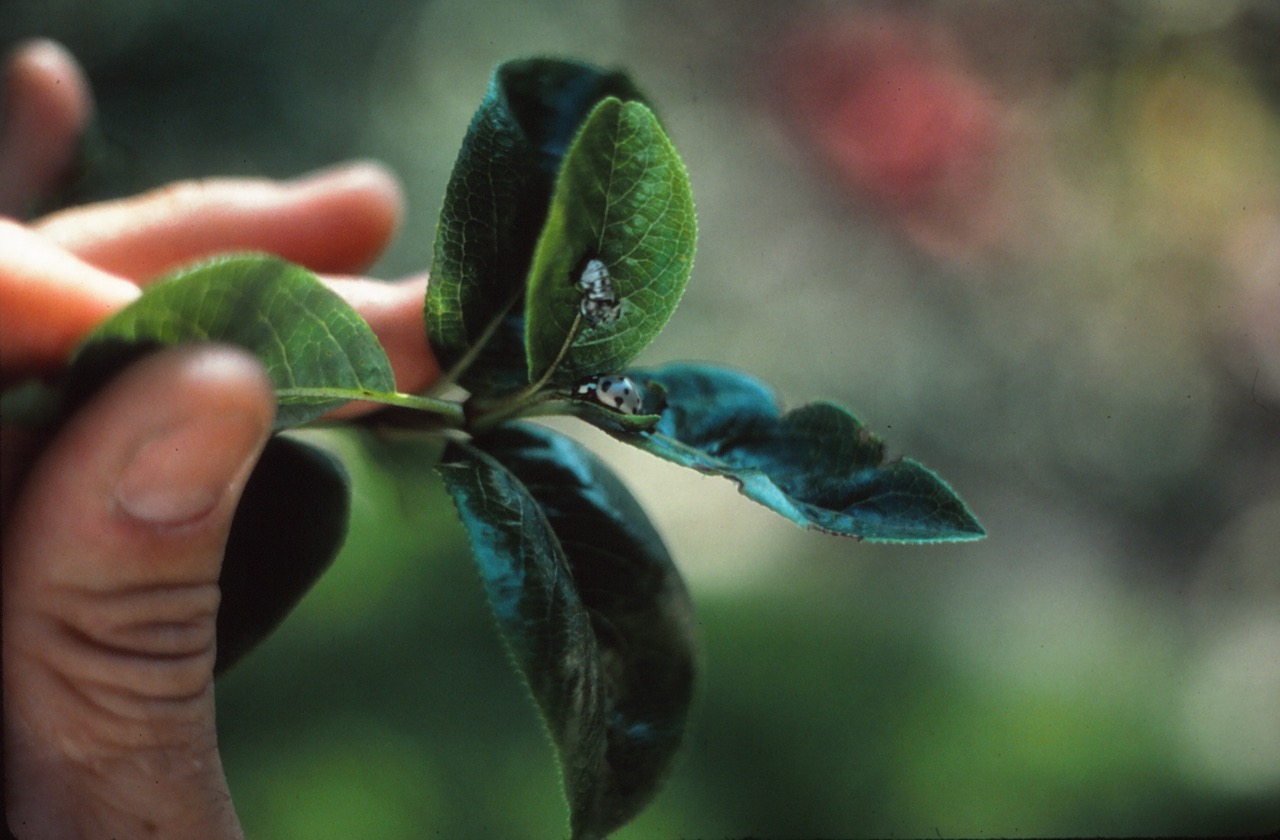 Ash gray ladybug - Olla v-nigrum, also called ashy gray lady beetle, is an unusual ladybug completely different from common the colorful species although in the same family (Coccinellidae). Coccinellids range from typical red with black spots to spotless to yellow or black or even mottled brown. Some Coccinellids are of the stereotypical ladybug shape, while others resemble more narrow beetles with long legs. Female ladybugs are generally larger than the males. You won’t see these ladybugs too often because they are mainly arboreal and seem to like taller trees and the pest insects that hang out there. 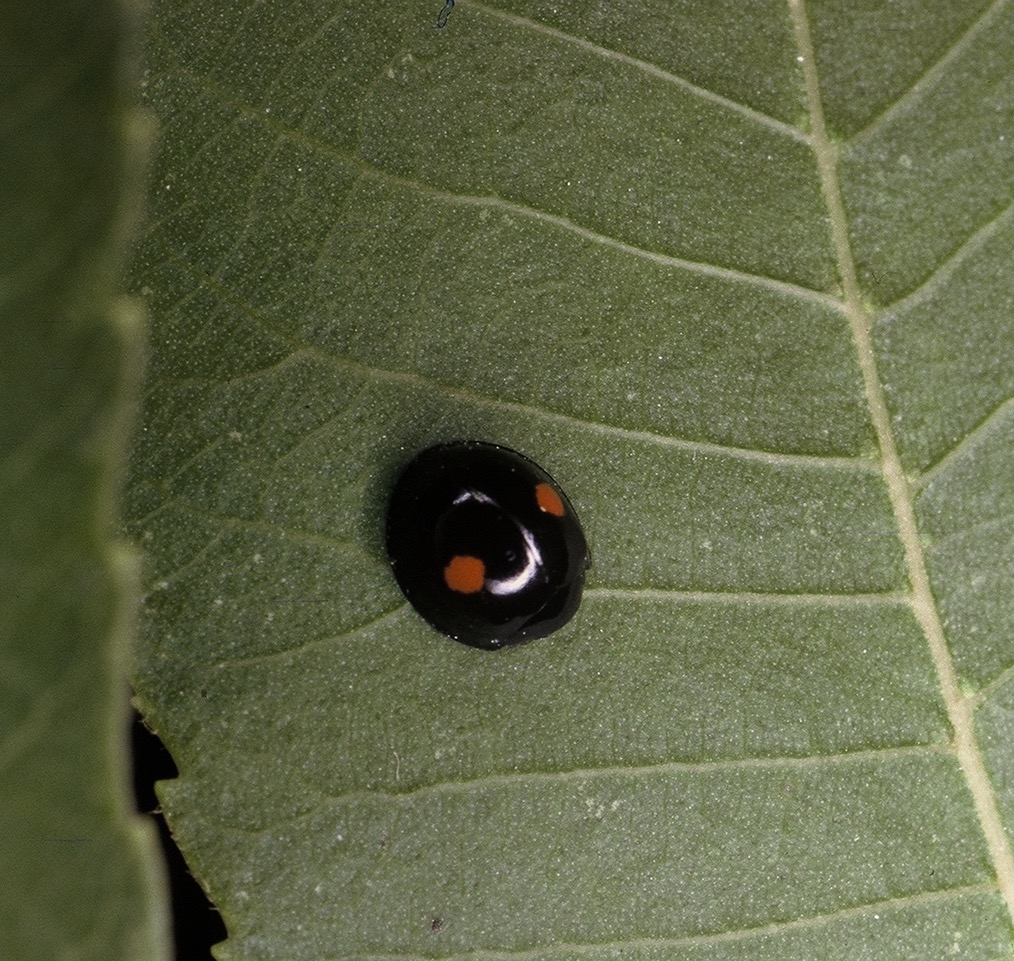 Twice stabbed ladybug - This pretty, shiny black, round ladybug with two red or orange spots on the back is a great friend because it likes to eat destructive scale insects. Chilocorus stigma is a native resident of the United States and Canada but does not live west of the Sierra Nevada. The two-stabbed lady beetle, Chilocorus orbus, is found widespread in California. Females put their fertilized eggs in the carcasses of scale insects. These friends are usually found in trees. This is the ladybug that helps with crape myrtle bark aphids that attack stressed trees that are too deep in the ground. 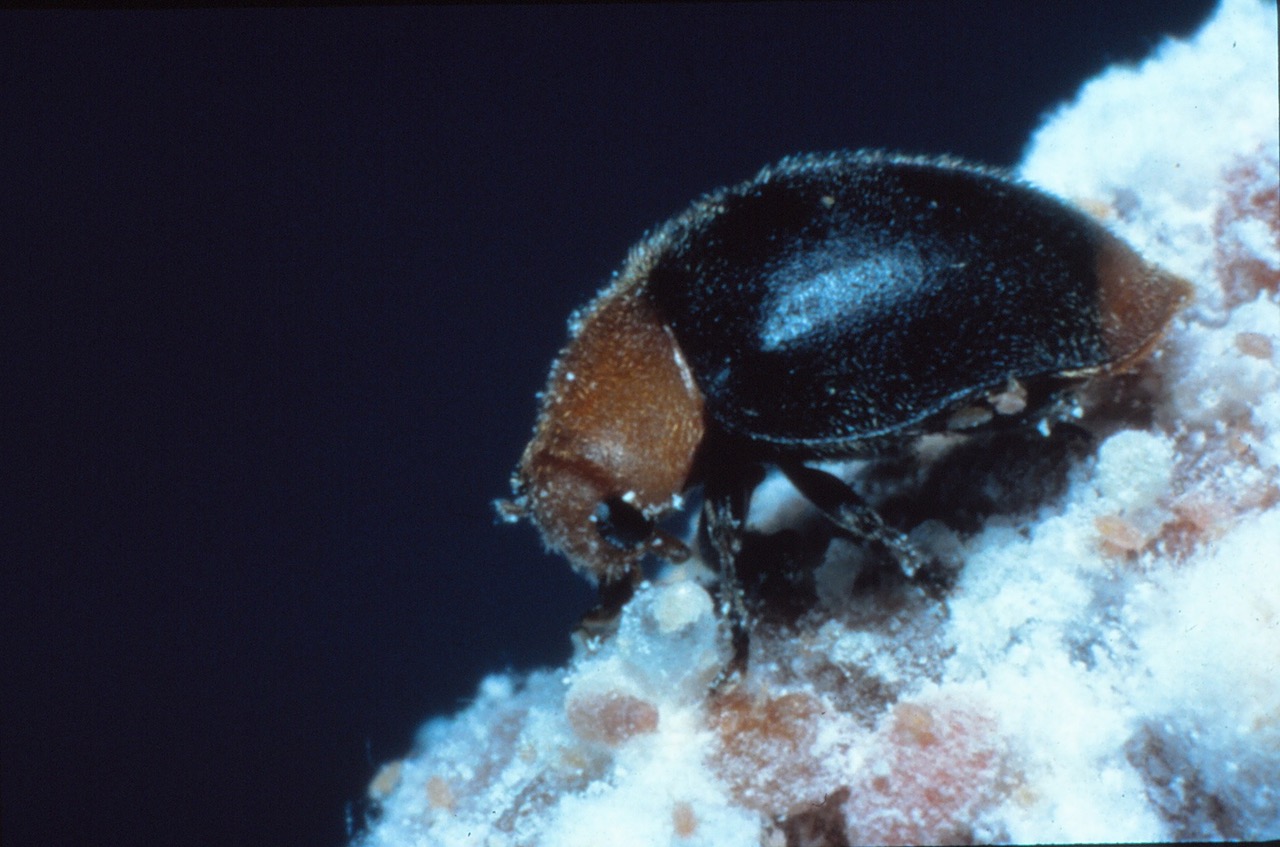 Mealybug destroyers - Cryptolaemus montrouzieri, also called mealybug ladybird, is unlike many of the often brightly colored Coccinellidae because it is predominantly brown and has no spots. The adult stage as well as the larval stage is an excellent predator. Mealybugs are the primary prey but aphids are also preyed upon when mealybug populations are low. The larval stage has wooly appendages and is cigar-shaped body that looks as if it has been rolled in flour. Larval stages can often be seen crawling in clusters of aphids. Unfortunately, they are sometimes misidentified to be mealybugs and thus insect pests. This species is endemic to Queensland and New South Wales, Australia. 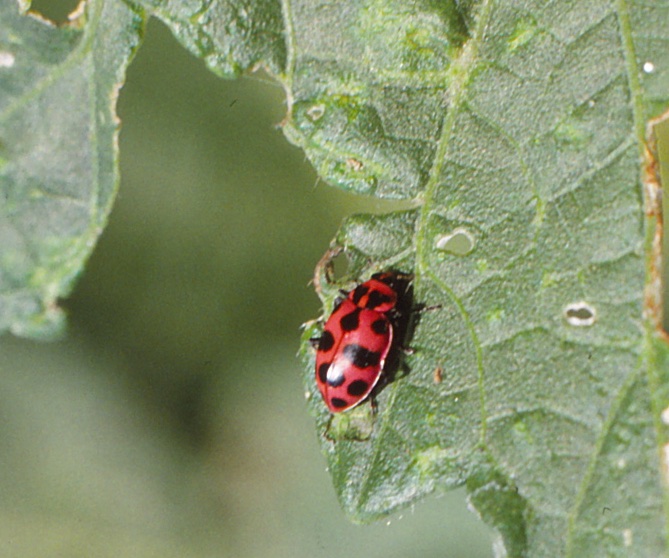 Pink spotted ladybug - The C-mac ladybug, found along the Canadian and the United States border region, fast, very active and a great feeder on eggs of other insects. It is oblong in shape and less than a quarter-inch long. It has pink or yellow head region with pink body, and black spots covering the body. It is one of the fastest among the group with a huge appetite. It feeds on Colorado potato beetle's eggs. 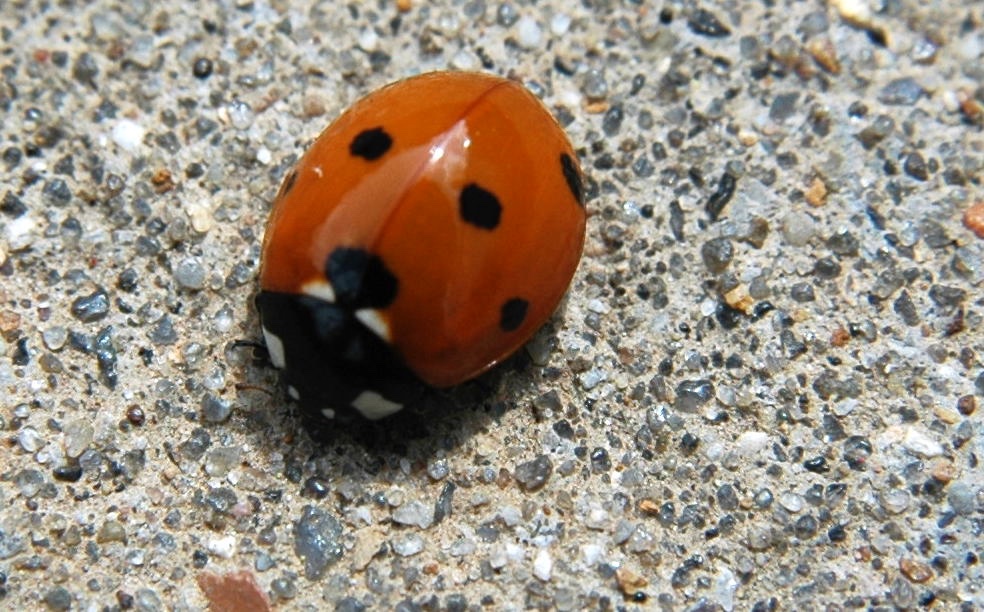 Seven-spotted ladybug - Coccinella septempunctata, in North America called "C-7", is the most common ladybird in Europe and a voracious eater of aphids here. This ladybug is round and has a dome-shaped body. It has two white spots on its head and has seven black spots on its red body. It appears during the springtime. This pretty bug made its way to North East United States in 1970's. 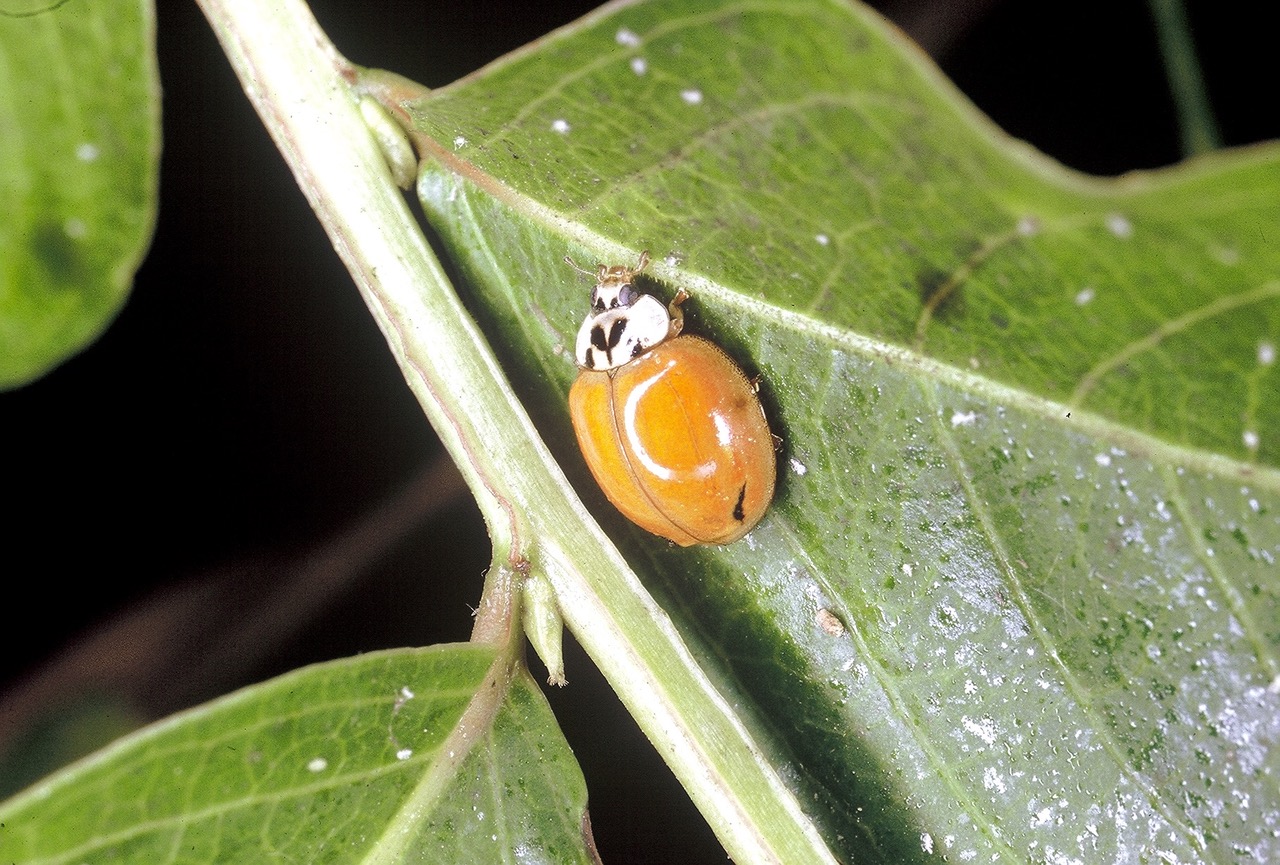 Asian ladybug - Harmonia axyridis is native to China, Russia, Korea and Japan, but has been here some time being imported in the 60’s to help with aphid control on crops. This import is often a little too friendly being attracted to illuminated areas and light colored walls indoors. They come in mostly in the fall and early winter obviously enjoying the warmth. Some have solid colors that range from bright red to soft yellows and even light tans. If they bother you indoors, vacuum them up or scoop them with a stiff piece of paper and toss outside. They are greatly helpful in controlling pest insects.
It is said that they will eat and damage fruit occasionally, but I’ve only seen them in holes pecked by birds. Non-killing organic repellents work well if there are too many on your food crops. They do smell bad if smashed, so don’t do that. Our native ladybeetles smell bad too. Also taste bad. Don’t believe me? Lick you finger, touch a native ladybug and the taste your finger. The bad taste is a defensive mechanism that all lady beetles have that helps deter predators.
This concern about the ladybugs being pests is probably related to new pesticides on the market that are labeled specifically for the control of Asian lady beetles.
OTHER LESS COMMON SPECIES
Vedalia ladybug - It is very tiny, and has a black and red body. This was the first lady beetle to be introduced in the U.S. These bugs were of great help in saving citrus crops in 1800s' from an insect attack.
Twenty spotted ladybug - It is yellowish in color and is found in North America. It is a very tiny insect abut 1/8”. Unlike other lady beetles, this species feeds on and helps control mildew.