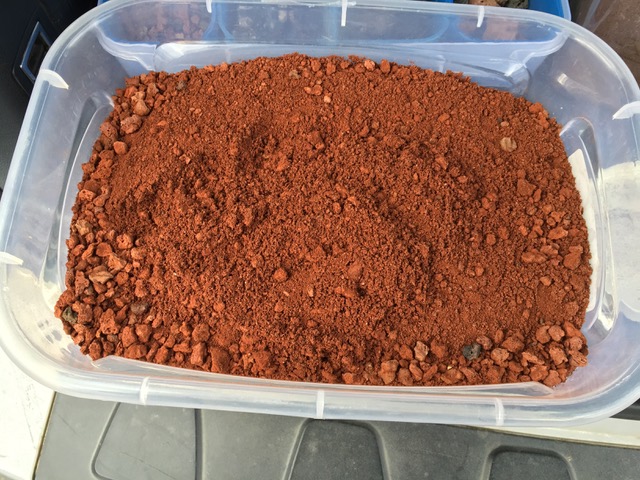 The sand-sized and smaller waste material left from lava gravel mining is an excellent, high-energy soil amendment material. It can be used in potting soils, germination media, and bed preparation. Lava sand, or lava in any size, increases the water holding capacity of the soil and increases the paramagnetism. The result is increased production of any plant crop. Broadcast at 40-80 pounds per 1,000 square feet. (1 ton per acre) or till into new beds at 80-150 pounds per 1,000 square feet. Lava sand works in potting soil, propagation flats and in any container plants. If possible use lava sands with high paramagnetic count. Lava sand offers a physical improvement to the soil that moves unhealthy, unbalanced soils toward balance. The mineral make up of lava sand is less important than the shape of each piece of sand. The angular, porous pieces of lava hold and exchange nutrients efficiently and they attract and redistributed cosmic energy in the soil.

Cosmic energy is a fancy term for the sun’s energy. The sand-sized and smaller waste material left from lava gravel is an excellent, highly paramagnetic soil-amendment material. It can be used in potting soils and bed preparation for all landscaping and food crops. Finer textured material is even better. Lava sand is magical stuff. Dr. Phil Callahan, the scientist who probably understands more about the secrets of nature than anyone on earth, taught me to teach people to add lava sand to the soil. When he explains the reason why, it sounds so simple and makes so much sense, but when I try to explain it, there’s often something lost in the translation.

Here are some of the ways to use lava sand for greater plant production.

Bed preparation - till together with compost and organic fertilizer. Use 40 - 80 pounds per 1,000 square feet.

Potting soil - add up to 1/3 the volume of good potting soil. Lava sand - magic? No, it just helps the physics, chemistry and biology of the soil.

Shortly after I had turned North Texas and Oklahoma on to this fascinating natural material the questions started coming in. “OK, it’s working great, but why? What’s in lava sand that’s making plants respond so strongly?” At this point I really didn’t know for sure other than what Dr. Callahan had told me about energy and paramagnetism. I knew that trying to explain paramagnetic energy to organic gardeners would be difficult and explaining it to organiphobes would be a total waste of time.

So, I tried another angle. soil test. I sent some lava sand, which had been brought into the Dallas/Fort Worth area from New Mexico, to K. Chandler at Texas Plant and Soil Labs in Edinburgh. The results were interesting but puzzling. The nutrient value was minimal and the pH was 8.2. How was this stuff working to make plants grow so well? I had never seen any chlorosis (iron deficiency) come on from using lava around susceptible plants such as sweetgum, dogwood or photinia. In fact, I saw just the opposite. Yellowing plants greened up. How could that be? It could be because pH is an indicator only - not a controller. Many factors in the soil are more important than pH. Lava sand addresses those factors. Lava holds water, just at the right level for a long time. If the soil has good moisture and a balance of minerals, organic matter, microbes and earthworms, plant production will be good. The paramagnetism of the lava sand helps make all that happen.

Lava sand is crushed scoria, a reddish brown to black volcanic slag. It has a texture full of holes. Lava sand is the most popular rock material. Considered by many to be an excellent source of energy for the soil. Lava sand makes soil nutrients more available to plant root. It provides aeration and porosity to the soil. It helps retain the right amount of moisture in the soil, is durable and resists degradation.

The sand sized and smaller waste material left from lava gravel manufacturing. It is an excellent, highly paramagnetic soil amendment material. It can be used in potting soils and bed preparation for all landscaping and food crops. Finer textured material would be even better if it was easily available. This is one of the most controversial products I recommend. All the hard headed organiphobes have to do to see it’s power is - try it!

Q:  Is there a good time to apply lava sand, or can it be spread at any time of the year? Can it be used on shrubs and flower beds, as well as trees? What's the recommended amount to use? Is all lava sand the same?  C.N., Dallas, TX

A: Put lava sand out any time at a rate of 40 pounds per 1,000 square feet. For perennial beds, you could make a heavier application and add a layer of lava sand up to 2 inches thick before mixing it into the soil.  You can use lava sand in any soil and with all plants. All lava sands help retain moisture, but the varieties with the highest paramagnetism work best. The manufacturer or supplier should have that information.