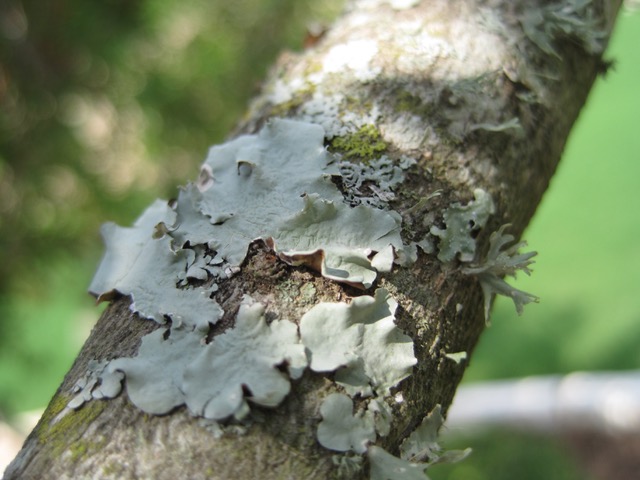 Lichens, or lichenized fungi, are actually two organisms functioning as a single, stable unit. Lichens comprise a fungus living in a symbiotic relationship with an alga or cyanobacterium or both in some instances. There are about 17,000 species of lichen worldwide. Lichens are not damaging to plants and no treatment is needed.

The dominant partner is the fungus, which gives the lichen the majority of its characteristics. Fungi are incapable of photosynthesis because they lack the green pigment chlorophyll and cannot harvest light energy from the sun and generate their own nourishment in the form of carbohydrates. Instead, they seek out outside sources of food. They absorb nutrition from organic substances containing compounds such as carbohydrates, fats or proteins.

Mosses and lichens are sometimes mixed up. Although both called non-vascular plants, only mosses are plants. Mosses are included in a group of non-vascular plants called bryophytes. Mosses are believed to be the ancestors of the plants we see today, like trees, flowers, and ferns. Lichens, on the other hand, are not similar in anyway to mosses or other members of the plant kingdom.

Although mosses are very primitive, they still have plant-like structures that look like and function like leaves, stems and roots. They have chloroplasts throughout their entire bodies and can photosynthesize from all sides of their structures.

Lichens, on the other hand, are completely different. They do not have any roots, stems or leaves and their chloroplasts are contained only in the algae on the top surface of the lichen.

What lichens and mosses do have in common are size and habitats. Mosses retain water, which is what lichens use to prolong their growth cycle. That's why lichen pictures will have mosses in the photos.