Whether your house is being visited by mice or rats, the steps you must take to get rid of them are similar:

Mice generally are easier to deal with than rats and can often be gotten rid of by just removing food sources and plugging up obvious holes. Rats can be more persistent and can require more house proofing and yard clean-up. They are also intelligent and can be difficult to trap. Whichever type of rodent problem you have though, the following suggestions will work to rid your home of rodents without dangerous chemicals.

It is important to remove all food sources from the home, especially the kitchen, including:

Mice and rats are very hard to control if there is a food and water source for them. The first step is to eliminate water and any form of food that is exposed, even crumbs. Thorough cleaning is important. Next eliminate the access. Stop up all holes, cracks and crevices where the rodents would have entry into the house, office or whatever. Repellents can now work. Try hot pepper dusts and sprays. Live traps sometimes have to be used, but the best control is still - cats!

The best traps are snap traps that are inside protective bait stations. The best place to set traps is close to walls in areas where rodents run. The selection of baits for trapping is important. Baits should be fresh and changed daily. Use a variety of baits on traps rather than a single kind of bait. Fruit, peanut butter and nuts all make good baits. 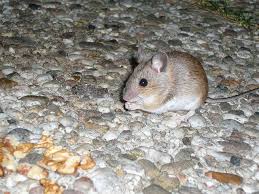 Although not native to North America the house mouse, since its early accidental introduction at most of our seaport towns, has become widespread throughout the United States and occurs either as a commensal or feral animal in practically all parts of the United States.

As commensal animals, house mice live in close association with man - in his houses, outbuildings, stores, and other structures. Where conditions permit, feral mice may be found in fields, along watercourses, and in other places where vegetation is dense enough to afford concealment. These feral animals make runways through the grass, or they may utilize runways made by rats and other meadow-inhabiting species. In the agricultural regions where irrigation is practiced house mice often are found in the vegetation along irrigation ditches, sometimes sharing common runways with native mice.

Although largely nocturnal, house mice are moderately active during the day, chiefly in their quest for food. In the wild they feed on a variety of plant material, including seeds, green stems, and leaves. Alfalfa hay, either in shocks or in stacks, affords an ideal source of food supply and, consequently, it is frequently infested with these mice.

House mice feed on practically any type of food suitable for the use of man or beast. They are particularly obnoxious around granaries, feed houses, and stores and may do considerable damage in destroying or contaminating food supplies intended for human consumption. In addition they will feed on such animal matter as insects and meat when available.

These mice are exceedingly prolific breeders. As many as 13 litters can be produced in one year. The number of young per litter averages about six. The gestation period is approximately 19 days, varying from 18 to 20. At birth the young mice are nearly naked with their eyes and ears closed. They develop rapidly; at the age of 3 weeks they are fully weaned and at the age of 4 weeks some of the young females are ready to assume family duties, although the average age of sexual maturity is about 35 days in females and 60 days in males. With commensals, breeding occurs throughout the year although it is somewhat curtailed in the colder months. In the wild state breeding appears to be restricted to the period from early June to late fall.

Although these mice are destructive when allowed to run free, they are widely used in laboratories as subjects for biological, genetic, and medical studies. When ranging free, however, they do a considerable amount of damage although they are not nearly so troublesome as the introduced rat.