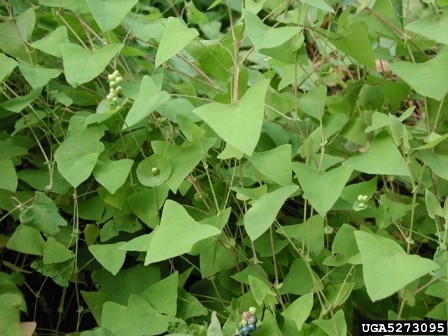 Buckwheat family (Polygonaceae) Also known as Asiatic tearthumb
RANGE:  India to Eastern Asia, China and the Islands from Japan to the Philippines, including Nepal, Burma, Manchuria, China, Korea, Taiwan and the Malay Peninsula
DESCRIPTION:  Herbaceous, annual, trailing vine. Stems are armed with barbs which are also present on the underside of the leaf blades. The light green colored leaves are triangular and alternate along the narrow, delicate stems. Distinctive circular, cup-shaped leafy structures, called ocreae, surround the stem at nodes, thus the name ‘perfoliata.’ Flowers are small, white and generally inconspicuous. The fruits are attractive, deep blue and arranged in clusters at terminals. Each berry-like fruit contains a single glossy, black or reddish-black hard seed.
PROBLEMS:  Grows rapidly, scrambling over shrubs and other vegetation, reducing native plant species in natural areas. Small populations of extremely rare plants may be eliminated entirely. Because it can smother tree seedlings, mile-a-minute weed has a negative effect on Christmas tree farms, forestry operations on pine plantations and reforestation of natural areas. It has the potential to be a problem to nursery and horticulture crops that are not regularly tilled as a cultivation practice.
RANGE:  Found in parts of Connecticut, Delaware, Massachusetts, Maryland, New Jersey, New York, Ohio, Pennsylvania, Rhode Island, Virginia, West Virginia, and Washington, DC. Colonizes open and disturbed areas, along the edges of woods, wetlands, stream banks, and roadsides and uncultivated open fields. It also occurs in environments that are extremely wet with poor soil quality. It will tolerate shade for a part of the day but does best in full sunlight. Its recurved barbs help it climb over plants to reach an area of higher light. It can survive in areas with relatively low soil moisture, but demonstrates a preference for high soil moisture. Birds are probably the primary long-distance dispersal agents of mile-a-minute weed.
CONTROL:  A biological control program was initiated by the US Forest Service in 1996, with field surveys in China and subsequent host specificity testing in quarantine in the US. A small weevil, Rhinoncomimus latipes Korotyaev, was found to be host-specific to mile-a-minute weed, and field release was approved by USDA-APHIS in 2004. It is important to maintain vegetative community stability and to avoid creating gaps or openings in existing vegetation. Maintaining broad vegetative buffers along streams and forest edges will help to shade out and prevent establishment of mile-a-minute weed. This will also help to reduce the dispersal of fruits by water.

Hand pulling of seedlings is best done before the recurved barbs on the stem and leaves harden, but may be done afterwards with the help of thick gloves. Try to pull up the whole plant including its roots. Previously infested sites need to be rechecked several times each year, and new plants removed until the seed germination period is complete. Repeated mowing or weed whipping of vines will reduce the plants reserves and prevent or reduce flowering which in turn reduces fruit and seed production.