Mulch Chapter from Organic Management for the Professional Book 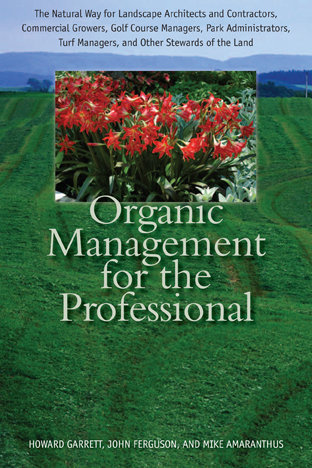 Chapter 7 - MULCH (From the book Organic Management for the Professional by Garrett, Amaranthus and Ferguson)

Native Mulch (freshly ground)
This mulch comes directly out of the grinder. It does not have any processing or screening on it.  It tends to be inexpensive and useful in special applications.  As in all native mulches it is a mix of whatever species came into the mulch/composting recycling facility.
If one is not in a hurry it is one of the best ways to naturally break up heavy clay soils and suppress weeds. To suppress weeds it is often applied 4-6 inches thick and sometimes rolled or watered down (weight).  The mulch smothers the existing plants essentially killing them. This mulch becomes very active biologically (microbes working) and they will use the nitrogen stored in the dead and dying weeds to help break down the mulch.  The microbes will also break apart clay particles creating a looser soil (see soil chapter).
It is also used for temporary road beds, erosion control, soil improvement, garden paths, land reclamation, filtration of storm water runoff, and any other application where large volumes are required and cost is an issue.
Wood Chip Mulches (single species)
Sometimes recyclers will grind up one single species of tree into chips that can be used as mulch.  Research has shown that these types of mulches may retard the growth of some species of plants. One study by Bartlett Tree Laboratory, U. K. compared 6 species of pure wood chip mulch of Beech Beech (Fagus sylvatica), Hawthorn (Crataegus monogyna), Silver Birch (Betula pendula), Cherry (Prunus avium), Evergreen Oak (Quercus ilex), and English Oak (Quercus robur) taken when the trees were dormant.
Horse Chestnut (Aesculus hippocastanum)
Bare root trees of Beech (Fagus sylvatica) considered transplant sensitive and Hawthorn (Crataegus monogyna) considered transplant tolerant were planted into a general tree compost mix into containers.  Mulches were then applied to a depth of four inches and results were recorded after one growing season.
Container trials showed that mulch type has a substantial affect on tree survival rate.  The un-mulched control survival was 10% while the mulch increased survival rates 20-70% with Hawthorn giving the best results in all cases (survival, growth and appearance).  The Hawthorn trees had 100% survival in all cases and the ones with the Hawthorn mulch had 20-30% higher dry weights than non-mulched controls. Cherry worked second best and all mulched trees did better than non-mulched.
Field trials of Conference Pear and Gala Apples were mulched to a depth of four inches and grown without fertilization or irrigation. Hawthorn and Cherry again produced the best results increasing crown volume by 100-150% and fruit yields by 400-600%. The worst mulch increased crown volume by 20% and fruit yields by 50% compared to the non-mulched controls.
The breakdown of various mulches releases chemicals that affect plant growth.  Other studies have shown that Cypress mulch slows the growth or a range of woody plants (e.g. hydrangea, spirea, and viburnum) compared to pine bark.
Eucalyptus grandis mulch has been found to be phototoxic to the germination of a range of seedlings. Black Walnut (Juglans nigra) inhibits growth and even kills some plants.  The Tree of Heaven (Ailanthus altissima) has been found to contain the allopathic chemical Ailanthone which is known as an herbicide.
Some single species mulches can stimulate the growth of trees. Application of sugars (ex. dried or liquid molasses) has been shown effective at increasing root vigor and reducing transplant stress and increasing survival rates Both Hawthorn and Cherry wood are high in sugars such as sucrose and sorbital. Also some pure mulches such as Hawthorn have been shown to increase concentrations of enzymes in the root and leaves that helps plants defend themselves from various pathogens.