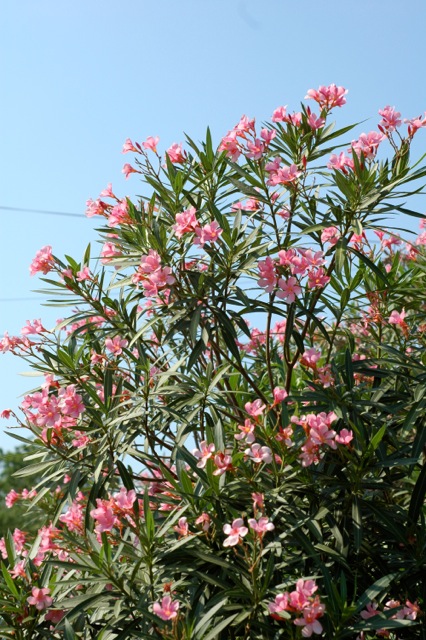 HABIT:  Upright shrub with many ascending stems that are bare below. Long thin leaves and red, white, or pink flowers all summer long.

CULTURE:  Plant in well-prepared beds with protection from the winter winds.

PROBLEMS:  Very poisonous plant parts, freeze damage. Xylella is a serious bacterial disease that can be controlled with spray treatments of hydrogen peroxide at 3% solution and the Sick Tree Treatment.

NOTES:  ‘Mrs. Roeding’ is the gorgeous salmon-color cultivar in the photo. It needs protection in harsh winters. Native to the Mediterranean.

ANIMALS AFFECTED:  All animals can be affected.

DANGEROUS PARTS OF PLANT:  The entire plant is toxic. Most animals are poisoned by consuming leaves, fresh or dried.

SIGNS:  Oleander contains the toxins oleandrin and nerioside, which very similar to the toxins in foxglove (Digitalis). This is a tropical plant, but is grown as an ornamental and as a houseplant in Indiana. Apparently the plant is not palatable, but will be eaten by hungry animals. It is reported that dried or wilted leaves may be slightly more palatable than fresh leaves, and the leaves are still toxic when wilted or dried. In one report with horses, it was indicated that approximately 1/4 pound of leaves (about 30 or 40 leaves) could deliver a lethal dose to an adult horse. Clinical signs may develop rapidly, and the animal may be found dead with no prior warning. In other cases, depression coupled with gastrointestinal distress is evident: vomiting (in those species that can vomit), diarrhea (which may be bloody), and abdominal pain. Irregularities in the heart rate and rhythm will occur: the heart may speed up or slow down, and beat erratically. As the toxicosis progresses, the extremities may become cold and the mucous membranes pale. Trembling and collapse can occur, followed by coma and death within a few hours.

FIRST AID:  If animals are observed eating oleander, contact a veterinarian immediately. The toxin acts quickly, and is lethal in small amounts. Emergency measures may be used to empty the gastrointestinal tract of remaining plant matter, and medications may be administered to control the effects that the toxin has on the heart. Despite emergency care, the animal may still die, but the sooner treatment is begun, the better the prognosis for survival.

SAFETY IN PREPARED FEEDS:  Oleander is extremely toxic, even in small quantities, and the toxin is not eliminated by drying. Therefore, feeds containing oleander are never safe for consumption.

Q. I have oleander plants which were here when I bought the property in 2004. They have been habitually dying back in winter so I cut them back to about 12 inch high and they grow back in 2-3 years. This cycle repeats itself every few years and they have had beautiful blossoms only about 2 or 3 times in the last 13 years. Enough already; I want to get rid of them!

What precautions to do you recommend when I cut them back, e.g. gloves, etc? I have burned the stalks before with the wind to my back. Any danger here? What do you recommend to replace them? I am inclined to low growing shrubs like Dwarf Nandina or Dwarf Burford Holly.
A. Oleanders contain a toxin called cardenolide glycosides. The toxin is mostly contained in the sap which is clear to slightly milky and sticky. When ingested this toxin can cause harm - and possibly death. The extremely bitter and nauseating taste of the sap (much like a rotten lemon) usually causes reflex in the stomach that rejects and expels the toxin. Although not impossible, a person or animal would have to have a strong stomach or no sense of taste for a dose of the toxin to be fatal.
When working with oleander, wear gloves and then wash hands and arms thoroughly when finished. Yes, the smoke from burning oleander is hazardous. Steer clear of the fumes and never use the branches as firewood.
Dwarf burford holly, dwarf Chinese holly, and dwarf yaupon holly would all be better choices than dwarf nandina. Dwarf abelia would also be worth considering.