Description:  In the South, the southern pine beetle attacks all species of pines, but prefers loblolly, shortleaf, Virginia, pond, and pitch pines.

Biology and life cycle: Overwinter as both larvae and adults in the galleries in trees. Infestations enlarge rapidly in the late spring as beetles outside the area are attracted by pheromones (potent odors that the beetles alone can detect) given off by attacking females.

Insight: This pest is primarily a problem in plantations of monocultures planted after clear cutting.

Dendroctonus frontalis v. Zimmermann is one of pine's most destructive insect enemies in the Southern United States, Mexico, and Central America. Because populations build rapidly to outbreak proportions and large numbers of trees are killed, this insect generates considerable concern among managers of southern pine forests. 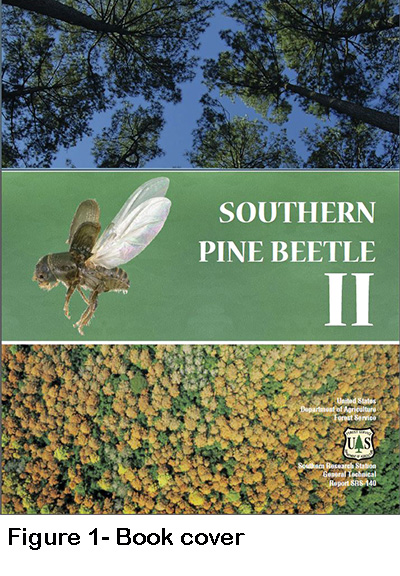 The beetle occurs from Pennsylvania to Texas and from New Mexico and Arizona to Honduras. Periodic outbreaks commonly recur in fairly well-defined areas. During one outbreak in the Southern States in 1973-77, the southern pine beetle killed the equivalent of about 4.5 billion board feet of pine timber. Average annual tree mortality may exceed the equivalent of 100 million board feet of sawtimber and 20 million cubic feet of growing stock.

Engraver beetles (Ips spp.) and the black turpentine beetle (Dendroctonus terebrans) are frequently associated with southern pine beetle outbreaks. Their interrelation in predisposing trees to southern pine beetle attack or in competing for the same food supply has not been fully explained.

The first indication of beetle-caused mortality is discolored tree foliage  Needles become yellowish, then change to a red color, and within 1 to 2 months become brown. Typically, pines are killed in groups ranging from a few trees to those covering several hundred acres.


Pitch tubes-small yellowish-white masses of resin, ¼ to ½inch (6-13 mm) in diameter-mark the points of beetle attack (fig. 3). In unusually dry weather, drought-stressed host trees may produce no pitch tubes; and a reddish boring dust lodged in bark crevices or in spiderwebs and leaves of under-story vegetation at the base of an infested tree may be the only indication of attack. Removal of bark from an infested pine will reveal S-shaped egg galleries that criss-cross one another in the inner bark and on the wood surface (fig. 4). The S-shaped galleries distinguish the southern pine beetle from all other pine bark beetles in the South.

If the attack is recent, some living adult beetles may be observed in the galleries or very tiny, whitish larvae will be visible in threadlike mines that extend from the galleries. Later, most of the brood will be concealed within the bark, but may be exposed by chipping or shaving the bark with a machete or hatchet (fig. 5).

Beetle broods complete their development in about a month from April through September. The adults exit by tunneling through the bark. Their exit holes resemble those made by birdshot (fig. 6). From spring to late fall, adult emergence takes place about the time infested trees begin to fade; during mild periods in winter, emergence may occur from trees whose foliage ranges from green to red or from fully defoliated trees.


The southern pine beetle is short-legged, stout, and about '4 inch (3 mm) long. The front of its head is notched, and the hind end of the body is rounded. Mature beetles are dark reddish brown to black. The newly emerged adult beetle is soft bodied and amber colored, but quickly
hardens and darkens.

Each attack involves one pair of beetles. When populations are large, thousands of beetles may invade individual trees. Each pair constructs a winding gallery in the inner bark and the female deposits pearly-white eggs in individual niches along the sides (fig. 7A). The galleries, which frequently meet or cut across one another, girdle the tree. Blue-stain fungi, carried by the beetles, hasten the death of the tree by plugging the water-conducting tissues.


The egg hatches into a whitish, crescent-shaped larva with a glossy, reddish-brown head. When fully developed, the larva is about '4 inch (3 mm) long (fig. 7B). Newly hatched larvae mine in the soft inner bark; older larvae mine outward into the corky bark. When fully grown, the larva changes to the resting stage or pupa (fig. 7C), which is pure white and very soft.

When pupation is complete, the newly formed adults chew individual exit holes through the bark and take flight. Emerging beetles may invade green trees in the vicinity or fly considerable distances to begin new infestations.

In the South, adults from over-wintering broods emerge and begin to attack uninfested trees in early spring-about the time dogwood trees flower. Depending upon latitude and elevation, there may be three to seven generations each year. Often, all life stages are present in different trees in the same infestation. During outbreaks, beetle activity peaks in early summer in the Gulf States and in late summer and early fall farther north. Under ideal conditions, the number of beetles may increase tenfold in a single generation and sparse populations may reach epidemic proportions within a summer.

The southern pine beetle over-winters beneath or within the bark in the egg, larval, pupal, or adult stages. Adults emerging during warm winter periods may attack either the same trees in which they developed or nearby uninfested trees.