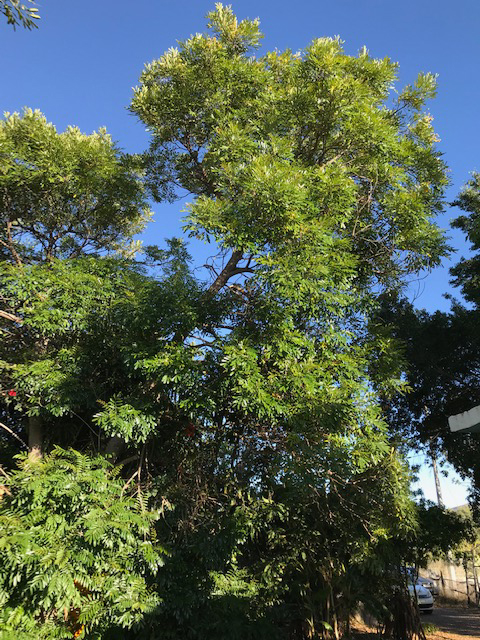 Small tree originating from Central Asia and the Middle East. The tree produces seeds that are widely consumed as food. Pistacia vera often is confused with other species in the genus Pistacia that are also known as pistachio. These other species can be distinguished by their geographic distributions and their seeds that are much smaller and have soft shells.

HABIT: Desert plant and is highly tolerant of saline soil and irrigation water having as high as 3,000–4,000 ppm of soluble salts. They can survive temperatures ranging between 14° F in winter and 118° F in summer. They need sun and well-drained soil, do poorly in high humidity and are susceptible to root rot in winter with too much water and poor drainage. Long, hot summers are required for proper ripening of the fruit.

Grows up to 35 ft., has deciduous pinnate leaves 4–8 inches long. Dioecious plant with separate male and female trees. The flowers are apetalous and unisexual and borne in panicles.

Fruit is a drupe, containing an elongated, edible seed commonly thought of as a nut, is a culinary nut, not a botanical nut. It has a hard, cream-colored exterior shell, a mauve-colored skin and light green flesh, with a distinctive flavor. When the fruit ripens, the shell changes from green to an autumnal yellow/red and abruptly splits partly open. This is known as dehiscence, and happens with an audible pop. Commercial cultivars vary in how consistently they split open.

CULTURE: The pistachio tree is long-lived, up to 300 years. Trees planted in orchards take approximately seven to ten years to reach significant production that is usually alternate-bearing or biennial-bearing, being heavier in alternate years. Peak production is reached around 20 years. Trees are usually pruned to size to make harvest easier. One male tree produces enough pollen for eight to twelve drupe-bearing females. Harvesting in the United States and in Greece is often accomplished using equipment to shake the drupes off the tree. After hulling and drying, pistachios are sorted according to open-mouth and closed-mouth shells, then roasted or processed by special machines.

In California, most female pistachio trees are cultivar 'Kerman', a scion from a mature female 'Kerman' grafted onto a one-year-old rootstock.

Pistachio trees are vulnerable to numerous diseases and infection by insects when in stress. Solution is the Sick Tree Treatment. 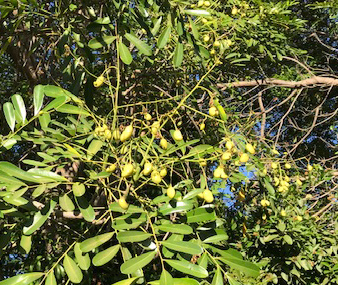