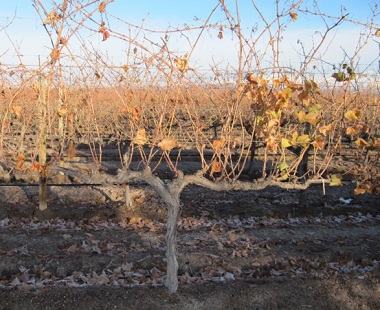 Ornamental trees are pretty easy to prune and we have done a newsletter on the subject in the past. See the newsletter archive on DirtDoctor.com. Pruning fruit trees should be done when the plants are dormant. It's easier to see what you are  doing and the removal of dormant buds invigorates the remaining buds.  Summer pruning on the other hand removes leaves, slows fruit ripening, and  exposes fruit to sunburn. Summer pruning can be used to slow down  overly vigorous trees or trees that are too large. If used, it is most effective in early summer.

Some people recommend severely pruning new trees at planting to short sticks 24 to 30 inches high saying that it encourages low branching  and equalizes the top and root system. I don't recommend that. The little trees use their first burst of energy to try to grow back the part that has been cut away.

Diseased or broken branches, suckers, basal sprouts, competing branches growing straight up, and downward bending branches should be removed. It's best to do most of the pruning in the top of the tree so that the lower branches are exposed to sunlight. Make clean cuts (within 1/4") of buds. Upright branches generally remain vegetative and vigorous. Horizontal branches  generally are more fruitful, but the best is to leave branches growing at 45 degree angles. Do not make flush cuts. Always preserve the branch collars. Tools should be cleaned in-between trees with hydrogen peroxide - not with bleach.

Peaches, nectarines and grapes bear on last year's shoot growth so remove about 50% of last years' growth. For fig, olive, walnut, chestnut, pecan, almond, cherry, persimmon, apple, pear, plum and apricot which  bear on spurs or less vigorous shoots, remove no more than 20% of last year's growth. For citrus, remove some tip growth so limbs don't get too heavy and break.

If you have any questions on this newsletter or any other topic, tune in Sunday 8 am -11 am central time to the The Natural Way - Dirt Doctor Radio Show. Listen on the internet or find a station in your area. The phone number for the show is 1-866-444-3478.

Please share this newsletter with everyone in your address book and all of your friends on Facebook and Twitter to help me spread the word on organics.