The Dutch animal protection society is happy with the spicy repellent, unworried by the possibility of burned bunny mouths. "Preventive measures are exactly what we want. It's better than going into the fields with a shotgun," said animal welfare spokesman Niels Doorlandt.

Everyone that is, except for the rabbits, who farmers say jump a meter in the air and run for cover after tasting the spicy sauce.  Farmers say its working. And animal protection spokesman Niels Doorlandt calls it a wonderful alternative to the shotgun.

Local farmers tried other remedies first: garlic sauce and Worcestershire sauce. But apparently nothing keeps the rabbits and rodents away quite like Tabasco.  So far, it has been used on lettuce, green beans, barley and wheat, with tests under way on young apple and cherry trees.  It takes about five small bottles to spray one hectare of crops. 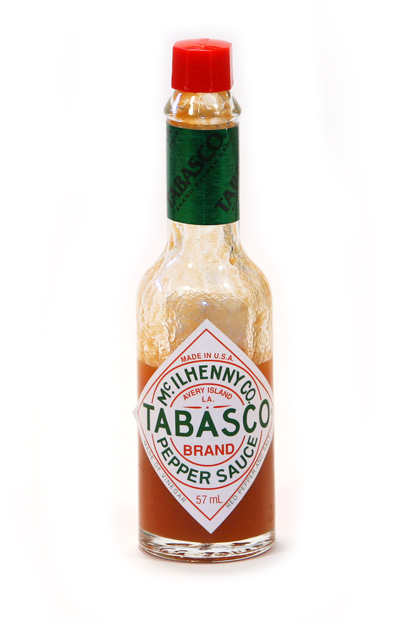 There still needs to be more research before Dutch officials give Tabasco use their stamp of approval, allowing distributors to sell it on a large scale. Meanwhile, the Tabasco company is said to be happy, although they are not advertising this latest use of their product, yet.

CD's for pest control
"Living on a farm outside of London (Ont.), our vegetable garden is constantly being attacked by voracious deer and rabbits," writes Lesley Fitzpatrick from a farm outside of London, Ont. "Last year, my husband strung wire around the garden and dangled AOL CDs at regular intervals all the way around. It worked like a charm. The slightest motion would set them stirring, reflecting the smallest amount of light and scaring the critters away. Too bad it doesn't work on weeds."

Question: I read the post about Tabasco/water mix keeping rabbits away. I have tried all the commercially prepared products and each year the rabbits sit in my garden, chewing happily, laughing at my attempts! I have several specific questions:

1)  Can you spray this Tabasco/water mix on tomato plants?
2)  Is there any vegetable that it cannot be sprayed on?
3)  Does it hinder the growth of the plants in any way?
4)  Does it change the taste of the vegetables or does washing carefully remove it?

PLEASE respond ASAP as my garden is up and growing and will be destroyed soon by all the rabbits!

Answer: It can be sprayed on any plants and doesn't hurt the growth. If any taste is added, it would be for the better. Tabasco is just peppers, vinegar and garlic. Used at one oz per gallon of water, gardeners have had mixed results. You might also want to try the commercial product Rabbit Scram which works very well. Rabbit Scram

Follow Up: So far the Tabasco in water is working great at keeping the rabbits away. I was very skeptical, but by this time last year the rabbits had completely destroyed my large vegetable garden and had eaten all my pansies. My garden looks gorgeous. The verdict is still out on how the veggies taste because nothing has harvested yet. But it has definitely kept the rabbits at bay!