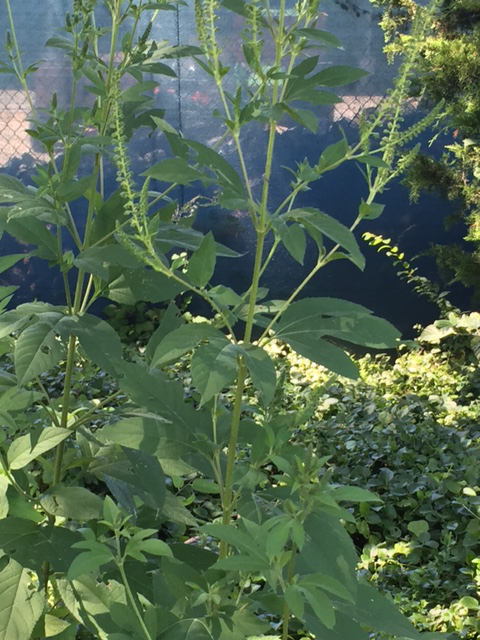 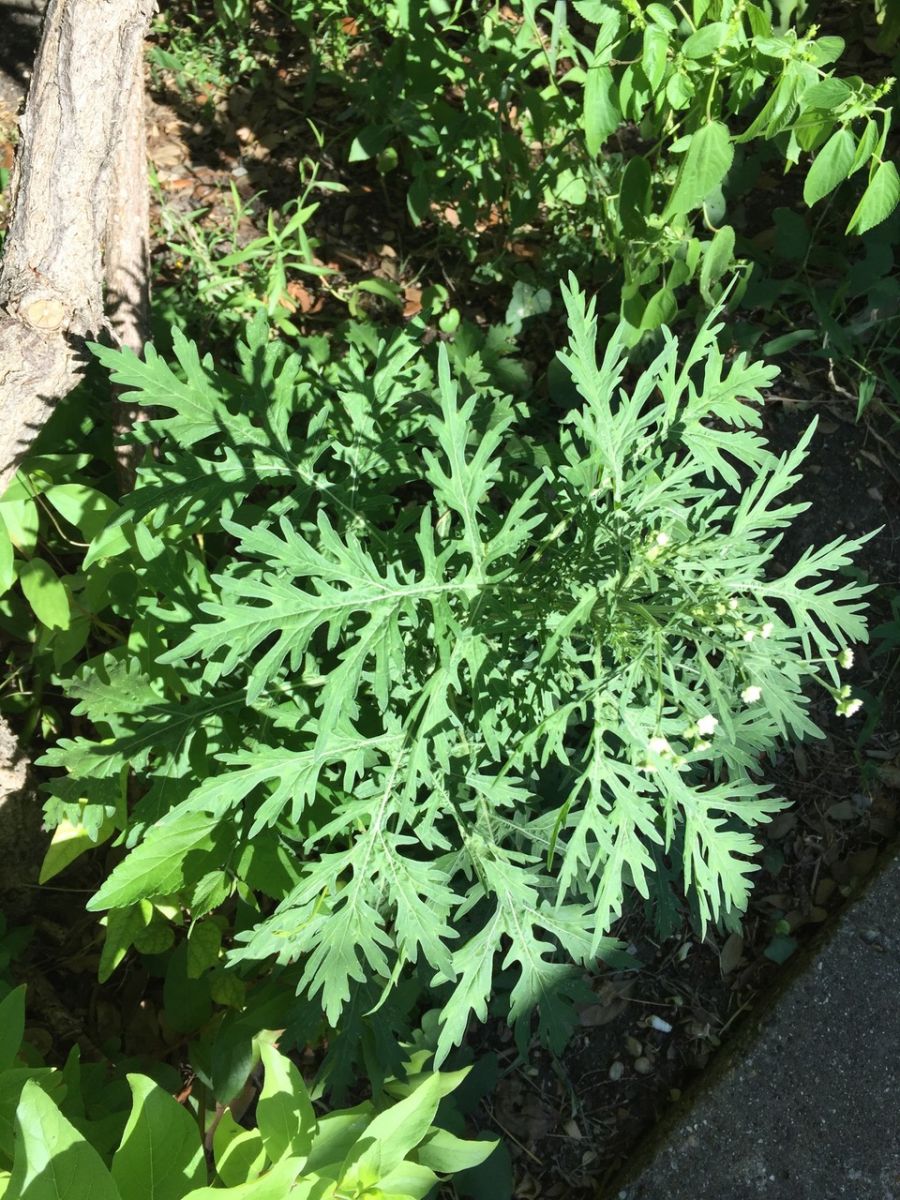 HABIT:  Summer annual up to 3' tall that branches frequently. It has hairy green to pinkish. Leaves are up to 6" long and 4" across. They are deeply cut and usually much wider at the base than the tip. Mature leaves are relatively hairless, but small emergent leaves are hairy on the undersides. Many of the upper stems terminate in one or more cylindrical spikes of flowers about 1-4" long. Near the base of the spike, one or two small spikes may develop that are only half as long. The small flowers are first green then turn yellowish green or brown.  Each 1/8” male flower produces fine yellow pollen that’s easily carried by the wind. It is released during late summer or early fall. Many seeds are produced. They can remain viable for 5 years or more. The root system is fibrous and extensive.
CULTURE:  Grows best in full sun and average to slightly dry conditions. It will thrive in soil containing high amounts of clay, gravel, or sand. It actually prefers sterile, unhealthy soil because of reduced competition from other plants. Common Ragweed is persistent and aggressive because the seeds can remain viable in the soil for several years. 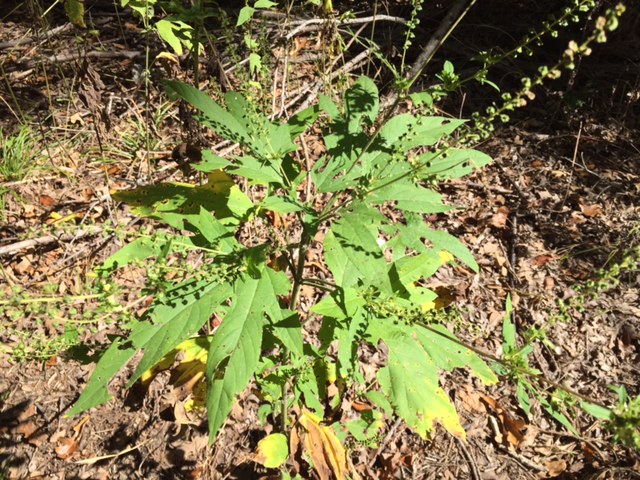 RANGE & HABITAT:  It is widespread, occurring across the country in disturbed areas of upland prairies, particularly along the margins near developed areas. Habitats include weedy meadows, cropland, abandoned fields, vacant lots, fence rows, roadsides, gravelly areas along railroads, gardens and lawns, construction sites, and waste areas. It thrives in a variety of disturbed sunny sites, especially where the topsoil has been exposed. It is allelopathic and can inhibit the growth and development of neighboring plants.
USES:  It is very valuable to many kinds of wildlife including honeybees. Caterpillars of several moths eat the foliage, flowers, or seeds. Many upland gamebirds and songbirds are attracted to the oil-rich seeds. Because the spikes of seeds often remain above snow cover, they are especially valuable to some of these birds during winter. The seeds are probably semi-digestible, thus some of them are likely distributed far and wide by animals. The foliage is bitter, therefore not often consumed.
NOTES: It is a major cause of hay fever during the late summer and early autumn. Aside from this unfortunate characteristic, it has considerable ecological value to various birds, moths and other insects, therefore it isn't good to destroy this plant in every case. Compared to other ragweeds (Ambrosia spp.) Common Ragweed has a finer leaf texture. 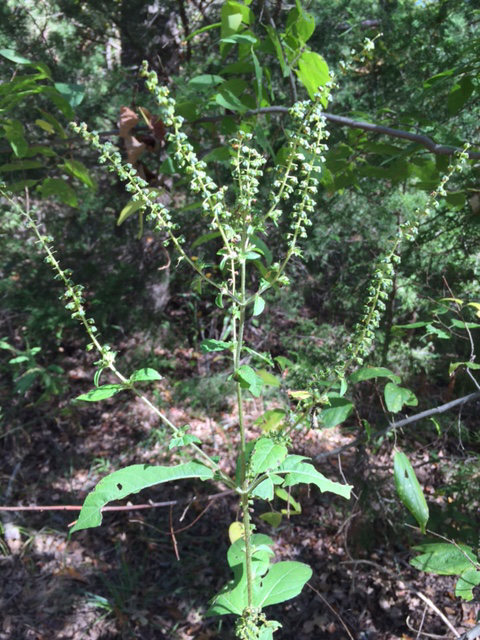 GIANT RAGWEED  Ambrosia trifida
FAMILY:  Aster family (Asteraceae)
HABIT:  This plant is a summer annual that becomes 3-12' tall, branching occasionally. The green stems are covered with white hairs. The opposite leaves are up to 12" long and 8" across. Large leaves are divided into 3 or 5 lobes. Many of the upper stems terminate in a cylindrical spike of flowers, about 3-6" long, with one or more smaller spikes near its base. The small flowers are yellowish green and devoid of petals and sepals. They occur in small drooping clusters less than ¼" across and are densely arranged all around each spike. The fine pollen of male flowers is easily carried by the wind. This typically occurs during late summer or early fall. Seeds are large, tough-coated and remain viable in the soil for several years. The root system is fibrous. 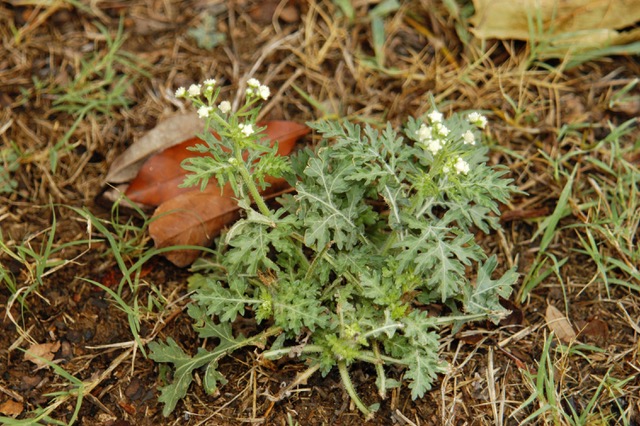 CULTURE:  Grows in full sun to light shade, moist conditions and fertile loamy soil. It also tolerates slightly drier conditions, but the large leaves have a tendency to wilt and wither away under drought. Poor soil containing some clay or gravel is also tolerated – under these less than ideal conditions, this plant will be smaller. This is a common plant that occurs across the country. It grows in vacant lots, cropland, abandoned fields, poorly drained waste areas, areas along roadsides and railroads and fence rows. 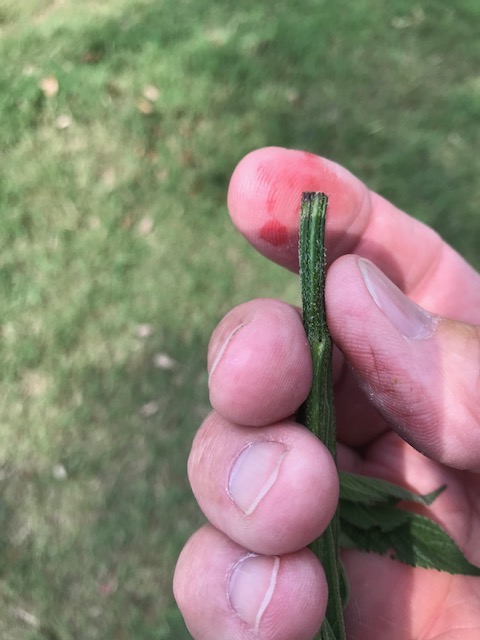 NOTES:  The flowers depend on wind pollination, so they attract few insects other than honey bees. The caterpillars of several moths feed on the foliage and other parts. Because of their hard coat, the seeds are less attractive to birds than the seeds of common ragweed. A few upland gamebirds eat the seeds. Cattle like to browse the foliage and to a lesser extent it is also browsed by white-tailed deer. Because of the poor digestibility of the seeds, it is possible that they are distributed by these birds and mammals. 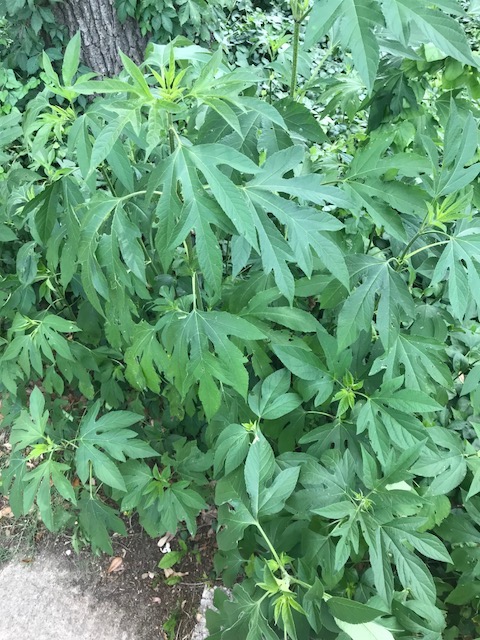 This plant is probably an allergy sufferer's worst nightmare. It has some ecological value to various moths, but otherwise is less important than common ragweed. Giant Ragweed can be distinguished from other Ambrosia spp. (Ragweeds) by its palmately lobed leaves. Other ragweeds have leaves that are pinnatifid or bipinnatifid. The name of this genus of plants refers to ambrosia, "the food of the gods" in antiquity. Giant ragweed stems bleed red when broken.
Ragweed (Ambrosia spp.) Annual broadleaf that indicates droughty soil. Releases a potent pollen that causes hay fever. Control by cultivation, mowing, building the soil and spraying with vinegar-based organic herbicides.