Genus: Crotalus and Sistrurus, with Crotalus species being the largest and most widespread

Length: Largest—eastern diamondback Crotalus adamanteus at up to 8 feet smallest—ridge-nosed rattlesnake Crotalus willardi at 12 inches long  Most species are 24 to 48 inches long

Number of young: most species give birth to 10 to 20 live, fully formed young

Age of maturity: 18 months to over 2 years

• Rattlesnakes are also called pit vipers because they have a heat-sensitive organ known as a "pit" on each side of the head that helps them locate and aim at prey. A rattlesnake can detect prey that are as little as 1/10 of a degree warmer than their background.

• Young rattlers leave their mothers at just a few weeks old, but when it’s time to hibernate in the winter, they follow their mother’s scent trail and use the same den. Future generations will also use the same den—some have been used for over 100 years. 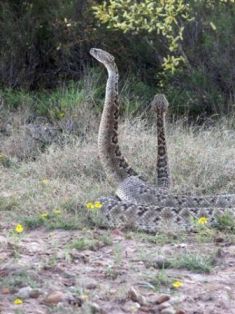