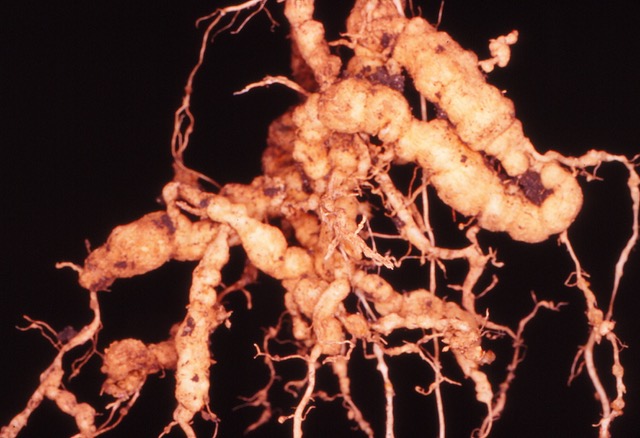 Identification: Most nematodes are slender, translucent, unsegmented round worms.

Biology And Life Cycle: Eggs are laid by the female in masses or can stay inside the female to hatch when she dies. Larvae are mobile in the soil. Adults result after several molts. Life cycle can take three or four weeks. Beneficial nematodes kill by unleashing bacteria that grow, feed on, and liquefy the body tissues of the pests.

Insight: Yes, we realize these aren't insects. Some nematodes are harmful to plants. Others are free-living and feed on organic debris, microorganisms, and other nematodes. Beneficial nematodes can be purchased and used to control armyworms, cabbage loopers, Colorado potato beetles, corn rootworms, cutworms, grubs, and other soil pests.

Nematodes control insect pests by entering through the mouth or body openings; once inside the host, they feed and reproduce until the pest is dead. New nematodes emerge in search of new victims. The most commonly available beneficial nematodes include Steinernema carpocapsae and Hederohabditis spp., which uses a single sharp tooth to gnaw through the outer covering of pests.

Early applications prior to heavy pest infestations, followed by monthly followup applications, is the ideal schedule when pest infestations are present. Once balance is reached, no more releases are necessary. Beneficial nematodes can be purchased in dry or wet formulations. They can be stored for short periods of time at 42°F.

The problem nematodes you have probably heard about the most are called root knot nematodes. As they feed on plant roots, they cause cancerous-looking knots to form. Other destructive nematodes live in and eat roots but do not form the knots. They are sometimes more destructive since they are harder to detect. Symptoms include a lack of plant vigor and poor growth. When a plant's root system is eaten away, it can't pull the proper amount of water and nutrients from the soil.

When nematodes are a problem, it's a signal that the soil is not in balance and is lacking sufficient beneficial life. When soil health is poor, the balance of good and bad microbes is out of kilter. Poor plant selection is the other possible cause of nematode infestation. Unadapted plants are usually in stress and thus susceptible.

How do we rid the soil of these pests? You don't--but you can encourage a naturally controlled population. Remember that insects, worms, and other pests are not a problem unless the populations are out of balance and therefore out of control. We can help restore balance by changing our methods of pest control and fertilization. Use spray products and fertilizers that stimulate microbial and beneficial nematodes that will attack and destroy plant-eating nematodes. If given the chance, the good guys will win out.

You probably don't think dead bugs are worth much. But that's not how David Shapiro-Ilan sees them. He and other scientists have even invented a formula to keep dead bugs from falling apart.

Why would anyone want to hold dead bugs together?

Inside the dead bugs are nematodes that can be used to protect crops from harmful pests, says Shapiro-Ilan. He's an entomologist who studies bugs for the Agricultural Research Service in Byron, Georgia. He teamed with Ed Lewis, a scientist at Virginia Polytechnic Institute and State University in Blacksburg, to give dead bugs a nice "coat" made of sticking agents and powders.

Nematodes are tiny, wormlike animals found in soil all over the world. Scientists think there are about half a million different species of nematodes. Some are crop pests themselves, while others are crop protectors. Nematodes like the kind Shapiro-Ilan uses are valuable because they cause disease in destructive bug pests, but don't harm humans, other animals, or the environment. How do scientists get the nematodes into the bugs?

The nematodes take care of that part themselves by worming their way into a bug while it's still alive. Then the nematodes multiply inside the bug (which eventually dies) and finally burst out of the bug body! The number of nematodes inside a single bug–depending on the species–ranges from 10,000 to 500,000. Although you can barely see one young nematode with your naked eye, you can't miss large groups of these tiny wigglers pouring out of the dead insects in what Shapiro-Ilan says looks like an explosion. Then the nematodes wriggle off to find other insects to "invade," starting the whole cycle all over again. How do nematodes help protect crops?

Shapiro-Ilan is using the nematodes as a natural replacement for chemical bug sprays, or insecticides. After new nematodes hatch inside the dead bug hosts, they're placed in orchards or greenhouse soils. The nematodes protect crops such as citrus, pecans, cranberries, and mushrooms by killing pests that live in the dirt, such as citrus root weevils and black vine weevils.

How do nematodes kill harmful bugs? 
They make a "home" for a type of bacteria that lives inside them. In return, the bacteria provide nutrients to the nematodes. Once a nematode–with its bacteria buddies along for the ride–gets inside a harmful bug, the bacteria leave it. Working together, the nematode and the bacteria are able to kill their insect host after about 48 hours. Then they feed off the bug and multiply inside it.

Why do the scientists coat the dead bugs with nematodes inside them? 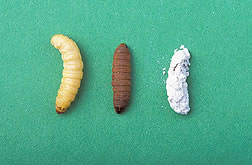 The coating formula, made from starch and clay, makes it easier to store and handle the dead bugs. It keeps the bugs from falling apart until their surface becomes moist. After it gets wet, the coating washes away quickly because it's made from natural materials. ARS scientists Bob Behle, in Peoria, Illinois, and Mickey McGuire, in Shafter, California, helped develop the coating.

Why do the scientists need the dead bugs? Why don't they just put nematodes directly in the field with the crops? Of the ways to release the nematodes, the scientists determined the best was to apply them inside their dead insect hosts. Upon emerging, the young nematodes infect more live insects than when released by other methods. The scientists think a chemical in the bug bodies causes the nematodes to work harder.