Green sea turtles are reptiles whose ancestors evolved on land and took to the sea to live about 150 million years ago. They are one of the few species so ancient that they watched the dinosaurs evolve and become extinct. 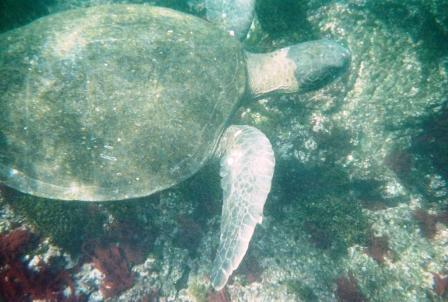 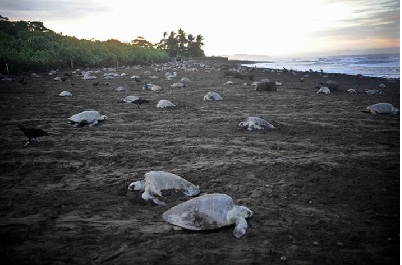 The green turtle is a large, weighty sea turtle with a wide, smooth carapace, or shell. It inhabits tropical and subtropical coastal waters around the world and has been observed clambering onto land to sunbathe.

It is named not for the color of its shell, which is normally brown or olive depending on its habitat, but for the greenish color of its skin. There are two types of green turtles—scientists are currently debating whether they are subspecies or separate species—including the Atlantic green turtle, normally found off the shores of Europe and North America, and the Eastern Pacific green turtle, which has been found in coastal waters from Alaska to Chile.

Weighing up to 700 pounds  green turtles are among the largest sea turtles in the world. Their proportionally small head, which is nonretractable, extends from a heart-shaped carapace that measures up to 5 feet. Males are slightly larger than females and have a longer tail. Both have flippers that resemble paddles, which make them powerful and graceful swimmers.

Unlike most sea turtles, adult green turtles are herbivorous, feeding on sea grasses and algae. Juvenile green turtles, however, will also eat invertebrates like crabs, jellyfish, and sponges.

While most sea turtles warm themselves by swimming close to the surface of shallow waters, the Eastern Pacific green turtle will take to land to bask in the sun. Occasionally seen sunbathing alongside seals and albatrosses, it is one of the few marine turtles known to leave the water other than at nesting times.

Green turtles, like other sea turtles, undertake lengthy migrations from feeding sites to nesting grounds, normally on sandy beaches. Mating occurs every two to four years and normally takes place in shallow waters close to the shore. To nest, females leave the sea and choose an area, often on the same beach used by their mothers, to lay their eggs. They dig a pit in the sand with their flippers, fill it with a clutch of 100 to 200 eggs, cover the pit and return to the sea, leaving the eggs to hatch after about two months. The most dangerous time of a green turtle’s life is when it makes the journey from nest to sea. Multiple predators, including crabs and flocks of gulls, voraciously prey on hatchlings during this short scamper.

Green turtles are listed as an endangered species, and a subpopulation in the Mediterranean is listed as critically endangered. Despite this, they are still killed for their meat and eggs. Their numbers are also reduced by boat propeller accidents, fishnet-caused drowning, and the destruction of their nesting grounds by human encroachment.