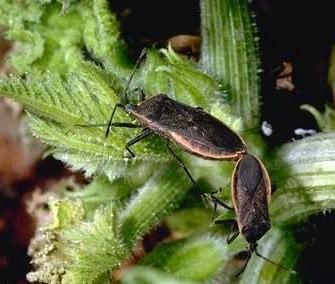 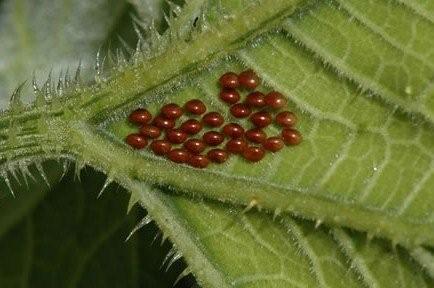 IDENTIFICATION:  Adults look like long stink bugs, are dark brown to black and covered with fine, dark hairs, and have a flat abdomen. Nymphs are pale green to light gray and have a reddish thorax and abdomen as they mature. Older nymphs are covered with a gray powder. Eggs are shiny metallic brown

BIOLOGY AND LIFECYCLE:  Adults over-winter in protected spots. In the spring females lay eggs in groups on both sides of leaves. Eggs hatch in one to two weeks; nymphs develop in four to six weeks with five molts. Usually one generation a year. 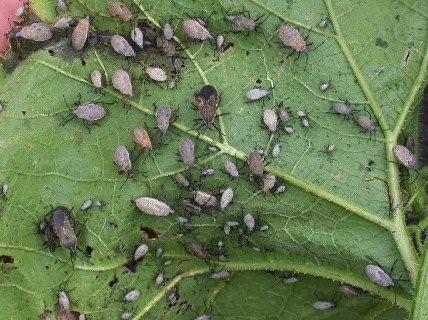 INSIGHT:  One of Howard's listeners has this tip: plant pink petunias among squash plants. He did this and hasn't seen a squash bug since. It's worth a try.

Another of my listeners called with a tip on controlling squash bugs and claims it works great. The technique is to put the plants in cages like those used for tomatoes. Growing the plants vertically rather than sprawled on the ground apparently keeps the bugs away. Give it a try and let us know if you have the same results. The most recent is the gardener who let us know that he ground up bay leaves and worked them into the soil before planting and had no squash bugs for the first time in many years. We all need to try this on squash vine borers. It might work on them as well.