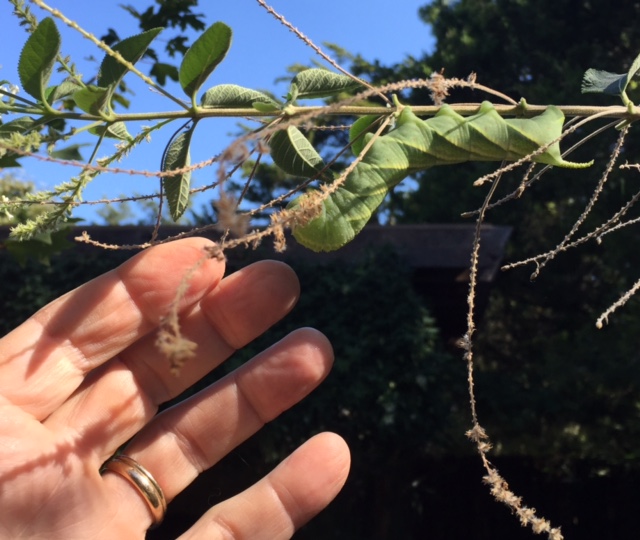 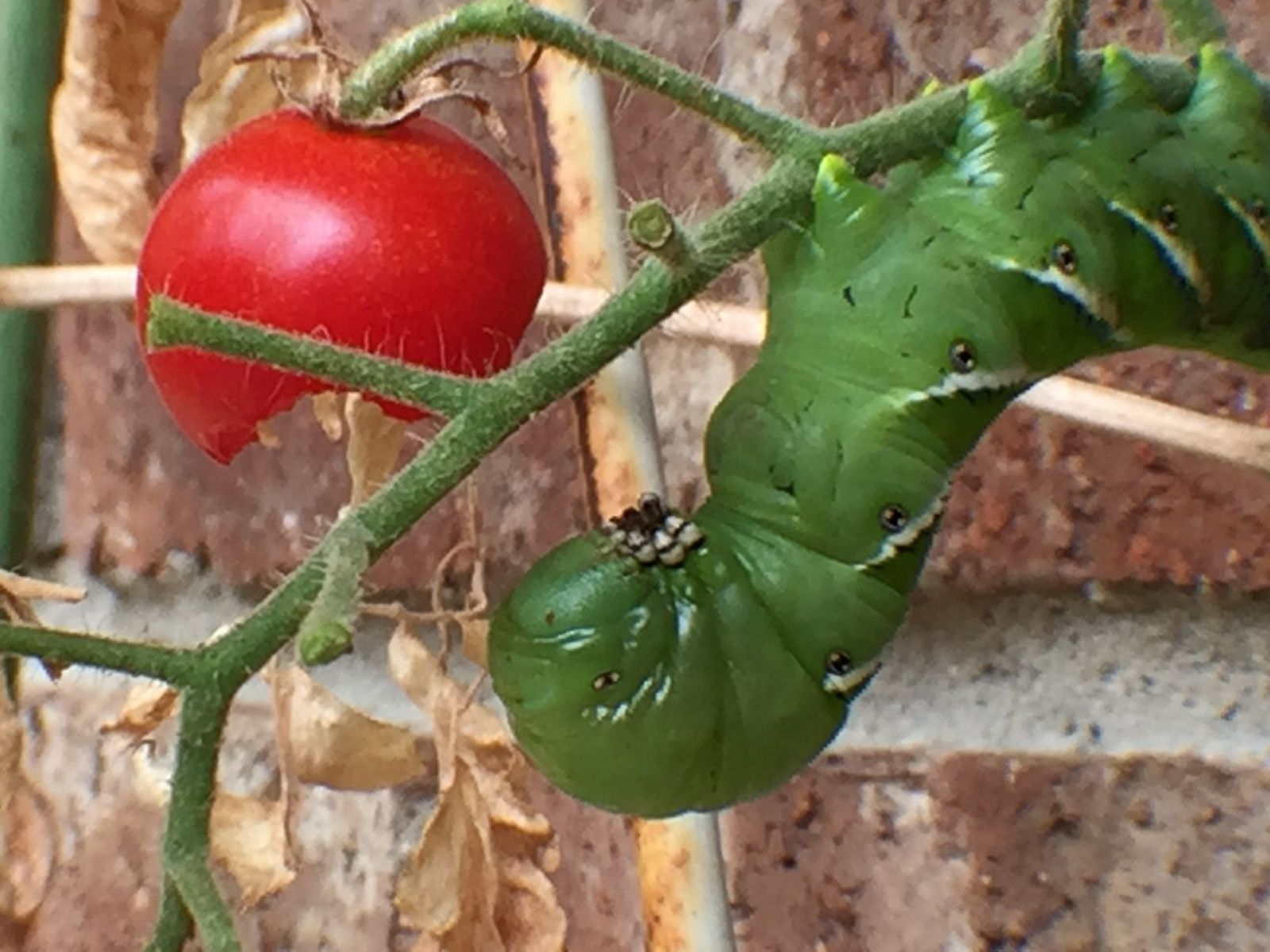 IDENTIFICATION: Adults are narrow-winged gray moths with rows of orange dots along furry abdomens. They drink nectar from flowers at dusk. Torpedo-shaped body. Larvae are green caterpillars with a black horn on the tail (tobacco hornworm has a red tail) and white diagonal marks on the side. Eggs are round and green. 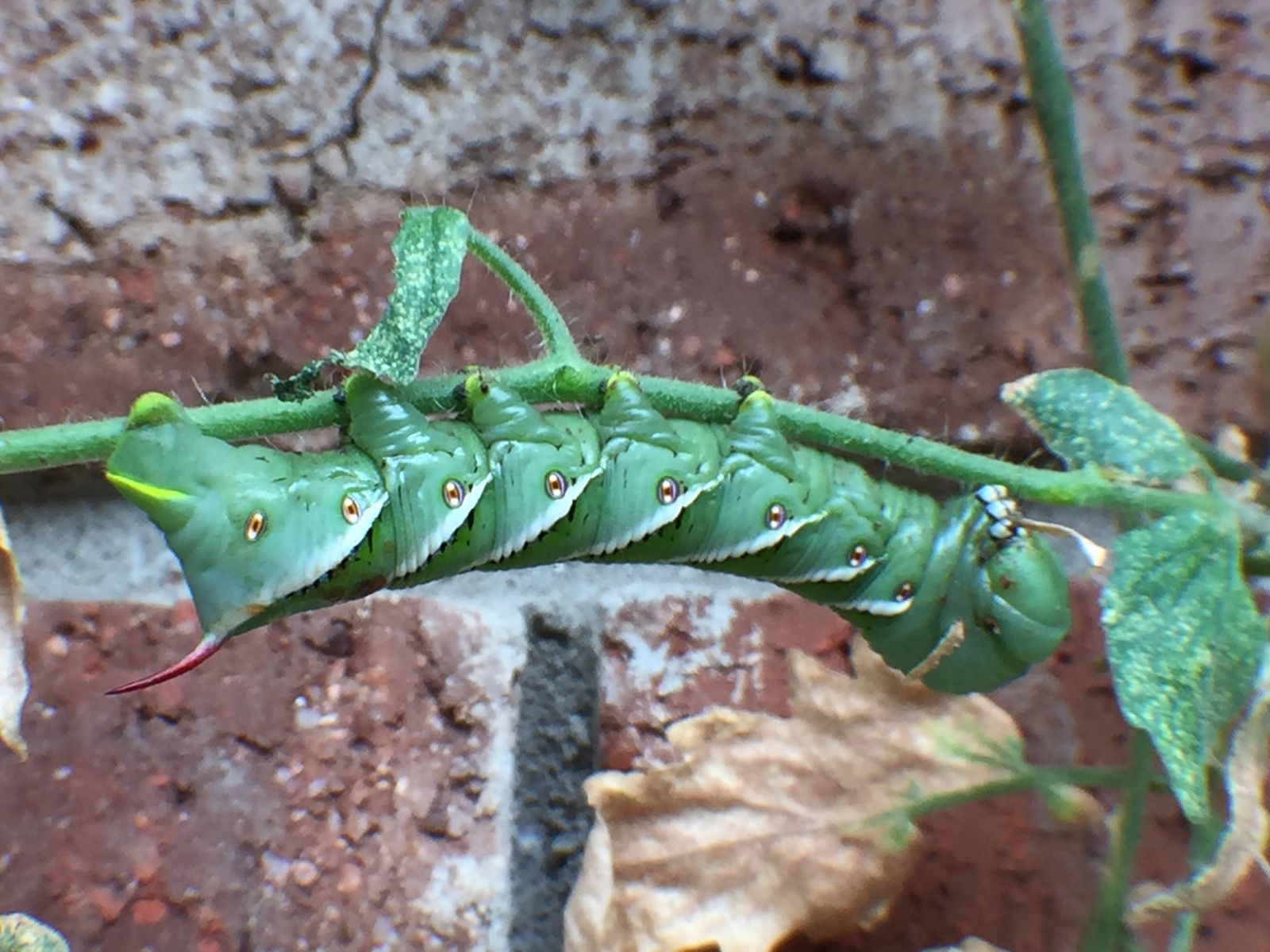 BIOLOGY AND LIFECYCLE: Caterpillars are seen more often than the adult moths. They pupate in cells in the soil. Large brown pupae overwinter in soil and emerge in June and July. The pupa has a tongue case resembling a jug handle. Females lay eggs singly under leaves. ECONOMIC IMPORTANCE: Can defoliate plants overnight. The adult with its long proboscis is necessary to pollinate deep-throated flowers and nightbloomers. INSIGHT: There are some 100 species of this moth in this country. They include the tomato hornworm, tobacco hornworm, hawk moth, and hummingbird moth. 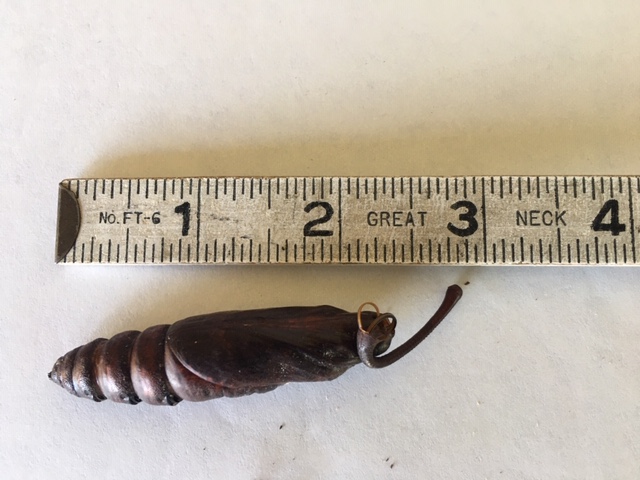 A single worm can eat most of a tomato plant before pupating. Because of their large size and appetites, the adult females usually deposit only one egg per plant. The larvae of most species have a horn at the end of their body, which gives it some protection--at least from humans who are scared of being stung. However, the horn and the mouth of these caterpillars are harmless. In some species the developing moth's tongue or proboscis is so long that the pupa has a sheath curving out from the head and away from the body and then back, resembling a jug or pitcher handle.

They are easy to hand-pick but are often missed because they blend so well with the plant. Hungry skunks that nightly patrol fields love to eat tomato hornworm.

The adult moth could be considered beneficial. With that long proboscis, they are necessary pollenators, able to feed on the nectar of deep-throated flowers and--since they are active at night--of flowers that open only at night.

"Several years ago I had a heavy infestation of tomato horn worms.  Their color so closely matched the foliage that I had great difficulty finding them in sunlight. Just on a hunch, I went into the garden at night when it was quite dark with an ultraviolet lights of the type used by mineral prospectors.  My hunch was correct, horn worms fluoresce brilliantly under ultraviolet light. It was then very easy to pick them off of the vines." How is that for scientific bug control?"