Axel Erlandson never intended to create a new genre of shaping trees or become the father of an art movement. He just wanted to entertain his family.

As young boy, the Swedish born Erlandson’s family settled in California. Axel grew up become a bean farmer, married his wife Leona in 1914 and had a daughter. That might have been the end of the story, had Erlandson not noticed the curious property of trees to naturally graft themselves together.

Known as inosculation, it occurs when one tree bonds to another. This gave Erlandson an idea and he began creating plans for a series of trees that were purposely grafted together to create pleasing shapes. It wasn’t fast, taking many years to gently shape, graft and prune the trees, but it was satisfying and the odd trees amused his friends and family. His first creation was the “Four Legged Giant,” four trees which he grew combine into a single truck creating a kind tree-gazebo.

Read the rest at the link above. 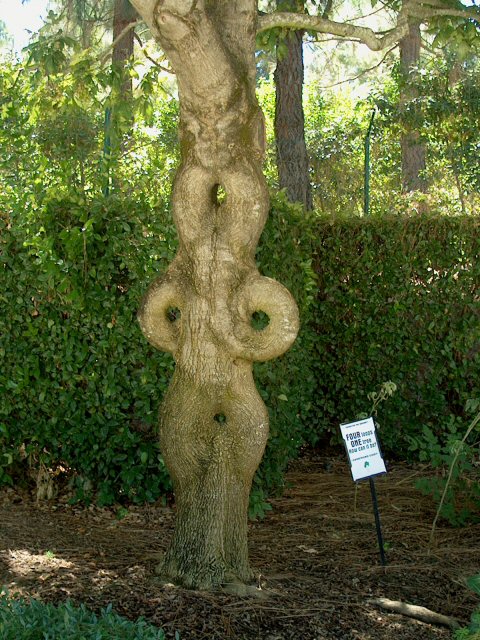 From the theme park site:

Around 1976, a local Santa Cruz architect, Mark Primack, heard about the ailing trees and led a valiant effort with his “Commando Gardeners” to save them, even risking arrest for trespassing in order to care for them. In 1977 the property was again sold with only 40 trees surviving. Primack’s efforts finally took root when they attracted the attention of tree lover and Gilroy Gardens founder, Michael Bonfante.

Due to Michael's creative vision, 29 of the remaining trees were saved. During the winter of 1984 they were carefully hand dug and boxed, their roots trimmed, then watered and fertilized to revive the trees. On November 10, 1985 during the "80-Ton Tree Caper", they were hauled over 50 miles of mountains. You can see video of that excursion here. More than 20 municipal, county and state agencies were involved in the permitting process and the ultimate move to their final home at Bonfante Gardens Theme Park, now known as Gilroy Gardens Family Theme Park.

There are 25 Circus Trees still alive today. Ten of these amazing natural wonders are featured in Dixie Cup Plaza near the turnstile area at the front entrance of our Park. Nine of them are planted in various areas inside the Park. The remaining six trees are behind the scenes and are not viewable to the public.

Read more at the link above.

The remaining "circus trees" in the park and the story of Axel Erlandson.

More about Axel Erlandson from Wikipedia

Axel Erlandson (December 15, 1884 – April 28, 1964) was a Swedish American farmer who shaped trees as a hobby, and opened a horticultural attraction in 1947 called "The Tree Circus",[1] advertised with the slogan "See the World's Strangest Trees Here".[2]

The trees appeared in the column of Robert Ripley's Believe It or Not! twelve times. Erlandson sold his attraction shortly before his death. The trees were moved to Gilroy Gardens in 1985. 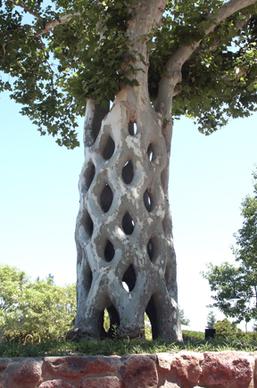