Tiny parasitic wasps could be used as pesticides to protect crops after researchers carried out the most detailed ever study of the creatures. 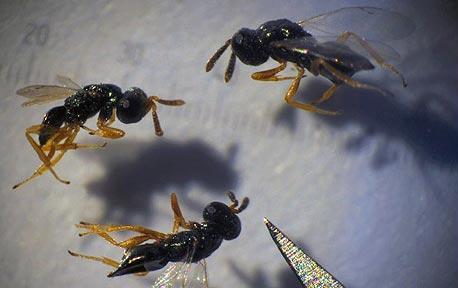 Nasonia wasp: The wasps, which all fall in the Nasonia genus, also offer promise for genetic research. Photo: DPA

A group of scientists who sequenced the genomes of three parasitic wasp species say their work has revealed that the tiny insects have features useful for both pest control and medicine, and could even improve understanding of genetics and evolution. In a study to be published in Science magazine, lead researchers John Werren, a professor of biology at the University of Rochester in New York, and Stephen Richards at the Baylor College of Medicine, Texas, described their tiny subjects: "Parasitic wasps attack and kill pest insects, but many of them are smaller than the head of a pin, so people don't even notice them or know of their important role in keeping pest numbers down," Prof Werren said.

"There are over 600,000 species of these amazing critters, and we owe them a lot. If it weren't for parasitoids and other natural enemies, we would be knee-deep in pest insects." The tiny insects lay their eggs inside often much larger hosts, including caterpillars. When the eggs hatch, they kill the unsuspecting host from the inside out. But the wasps only target specific insects, acting like "smart bombs," according to Prof Werren. "Therefore, if we can harness their full potential, they would be vastly preferable to chemical pesticides, which broadly kill or poison many organisms in the environment, including us."

The wasps, which all fall in the Nasonia genus, also offer promise for genetic research. Like the fruit fly, a common genetic research subject, the wasps are small, easily grown in a laboratory and reproduce quickly, but the wasps have only one set of chromosomes. "A single set of chromosomes, which is more commonly found in lower single-celled organisms such as yeast, is a handy genetic tool, particularly for studying how genes interact with each other," Prof Werren said.

The scientists also uncovered that the wasps have acquired genes related to the human smallpox virus, a discovery that may have applications for the study of evolutionary processes. "Emerging from these genome studies are a lot of opportunities for exploiting Nasonia in topics ranging from pest control to medicine, genetics, and evolution," according to Werren.

Source:
Functional and Evolutionary Insights from the Genomes of Three Parasitoid Nasonia Species

Abstract: Parasitoid wasps, which prey on and reproduce in host insect species, play important roles in plant herbivore interactions, and may provide valuable tools in the biological control of pest species. The Nasonia Genome Working Group (p. 343; see the news story by Pennisi) presents the genome of three very closely related species: Nasonia vitripennis, N. giraulti, and N. longicornis. The findings document rapid evolution between a host and endosymbiont that can cause nuclear-cytoplasmic incompatibilities that may affect speciation. The genomes of three parasitoid wasp species offer insights into speciation, insect evolution, and parasitoid biology. We report here genome sequences and comparative analyses of three closely related parasitoid wasps: Nasonia vitripennis, N. giraulti, and N. longicornis. Parasitoids are important regulators of arthropod populations, including major agricultural pests and disease vectors, and Nasonia is an emerging genetic model, particularly for evolutionary and developmental genetics. Key findings include the identification of a functional DNA methylation tool kit; hymenopteran-specific genes including diverse venoms; lateral gene transfers among Pox viruses, Wolbachia, and Nasonia; and the rapid evolution of genes involved in nuclear-mitochondrial interactions that are implicated in speciation. Newly developed genome resources advance Nasonia for genetic research, accelerate mapping and cloning of quantitative trait loci, and will ultimately provide tools and knowledge for further increasing the utility of parasitoids as pest insect-control agents.