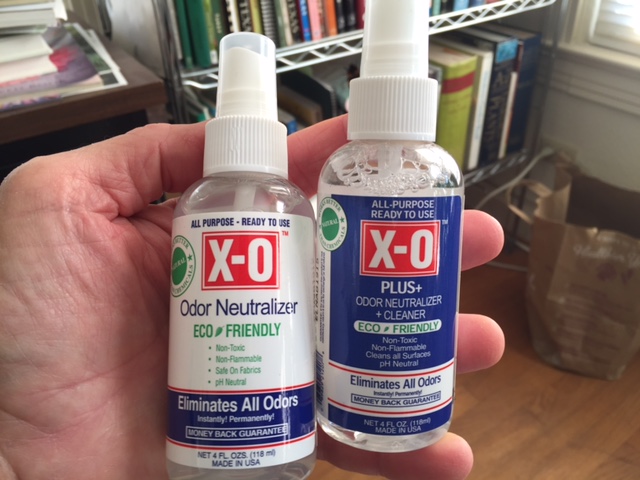 Pure botanical ingredients remove odor at the molecular level, without chemicals. Get the results you want while protecting your family from unnecessary harmful residues. For a natural healthy home, X-O uses the principles of organic chemistry to remove odors. When X-O enters the air, it attracts odor molecules and binds with them, changing their molecular structure so they can no longer produce odor. The process is instantaneous and complete. Simply put, X-O breaks the odor's chemical bond. Best of all, the process is non toxic, with no synthetic chemicals.

X-O is 100% guaranteed to remove your odor problem because it destroys odor at the molecular level using a breakthrough technology that's free of man-made chemicals.

X-O is guaranteed to remove any odor COMPLETELY, even the very worst:

X-O for skunked pets - first spray RTU X-O of either Reg (white label) or Plus (blue label) on your skunked pet so that it is easier for you to smell and handle without getting skunk oil all over yourself, too.  Then, wearing gloves, bathe your pet in X-O concentrate, working it into the fur, and let it start breaking down the oils. Note that some fur types hold the skunk oil more tenaciously than others, which may require longer or additional washings.

Don't worry if your pets start to lick the X-O - it doesn't taste especially good. Scott Herring, the owner of X-O, has been spraying it in his mouth 1000s of times during weekend tradeshows. It has never bothered him in 6 years of demonstration ingestion. The MSDS indicates a 26 year track record of product safety.
X-O immediately bonds to odor molecules and, since there are no harsh chemicals to hold it there, then immediately dissipates. Therefore, X-O can only work on odors currently present. If the source of the odor is still active (such as a dead mouse which is inaccessible for removal from behind drywall), it will still continue to emit odor until it fully dries and X-O will have to be re-applied to the area to get rid of any new odors it emits.

Similarly, humidity is famous for reactivating odors, therefore changes in the weather may create the need to reapply X-O to rid you of the newly-regenerated odors. If you want something that you apply and it stays there forever fighting the odor, that's fine, there are plenty of chemical products that will do that. But if it sticks around, chances are very good that it's being held there by strong, unsafe chemicals that you don't want in contact with your family. X-O's dissipation is a key sign of its safety. If humidity reactivates an odor, just reapply X-O and be pleased that it rids you of the current odor and breaks down again, immediately.

This is one of the ways you know it's safe, because it has no harsh chemicals to hold it there and keep it working. If it did, it wouldn't be safe around your home and pets. Safe, natural remedies break down right away - harsh chemicals stick around. So, be happy to re-apply X-O if new odors are emitted. It's the signature of product safety that you need to do so, and indicates that no residual is left to harm your family after each time it's done!

For years, X-O has had a dedicated HCPCS number (HCPCS #A4394) for Medicare reimbursement for ostomy use.  If incontinence were a federal reimbursement (it's state by state, instead), it would have a reimbursement code for that as well. X-O has long been used for ostomy and incontinence in VA hospitals. It's an excellent cleaner and deodorizer of urine accidents, including those horribly smelly instances where it's mixed with blood.

Additionally, X-O has serviced the mortuary industry and all their odors for the last 26 years, as well as bio-removal - death scene clean-up. X-O also happens (primarily due to the citrus components) to be a safe and effective de-greaser for home and transportation uses.

Truckers like X-O to carry in their sleeper cabs where you have all the odors, including pets, of a regular household confined into one very small space. Airlines have used it for years. It's not a corrosive, and safe to use within closed ventilation systems.

But, it's the animal rescue people who are the greatest mass-advocates for X-O. They are driven by passion and their sanction generally can't be purchased. Many of these groups only recommend X-O for use among their membership; several even make it the exclusive odor neutralizer and cleaner which they sell to their membership. Their obsession for their pets' safety is its greatest testimonial.
It doesn't matter what your problem odor is. Or whether its source is organic or man-made. Once X-O reaches the source, the odor will be removed. And, once treated, odors will not return because their very composition has been changed.

Mass Market Products Aren't Strong Enough
Grocery store products simply can't compete with X-O. Most just cover up odors with masking scents. These induce odor fatigue in the nasal passages so that you no longer distinguish the bad smell. Why else would they offer you a choice of fragrances when they're supposed to be removing odor? They also can't be used on pets. X-O removes the root cause of odor, the odor molecule, so your room smells fresh and wonderfully clean, the way nature intended. And, it does it without the potentially harmful chemicals that most store brands contain.

X-O Purity
X-O is made of pure de-ionized water and essential plant oils. These botanicals are extremely powerful yet safe and natural. Unlike other odor neutralizers that are composed of harsh chemicals that can cause lung or skin irritations and carry inhalation warnings, X-O has been rated non-toxic and non-hazardous for skin and inhalation.
X-O was developed 26 years ago, back when "natural" was not seen as preferable to engineered chemicals. Today we know differently, and X-O is used by major airlines, hospitals and nursing homes, hotels, rental car agencies, and countless carpet and industrial cleaning companies. X-O works just as well for home use, delivering trustworthy odor elimination without chemicals or toxins that could hurt your family or pets.
Safety
We've all been trained to read the labels on food at the grocery store. But how many of us really read the labels on common household products? These can be disturbing. Many carry warnings about deadly fumes, vapors, combustibility, corrosive action, and other hazards. Most people would choose not to have these in the home if they had an alternative.
X-O is safe. It contains no enzymes (which introduce biologic bacteria to your home), ozonators (which create damaging free radical oxygen molecules, also known as ozone smog) or solvents (which introduce dangerous chemicals to your family's environment). X-O contains no phenols (common disinfectant which is dangerous to pets) or alcohols.