Beetle--According to the Coleopterist Society (coleopterists are people who study beetles and their habits), beetles are the dominant form of life on earth. One of every five living species is a beetle! Various beetle species live in nearly every habitat except the open sea, and for every possible kind of food, there is a beetle species that eats it. Beetles appeared before dinosaurs existed, and they now greatly outnumber the dinosaurs' descendants, the birds. Beetles include beneficial and pest species, beautiful and plain, huge and tiny. They have even had a role in human culture, most notably among the ancient Egyptians, who revered the sacred scarab as a symbol of life and rebirth.

Some beetles attack plants that are in stress. Spray Garrett Juice plus citrus oil for problem infestations, but make sure the beetle in question is harmful because many are beneficial. Apply beneficial nematodes to the soil for additional help. Shown below is the beneficial caterpillar hunter beetle. 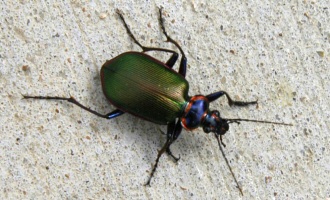 Q:  We have a beautiful mustard green crop that has survived the freezes of this winter. When harvesting the leaves and stems I noticed about 1/3 of the leaves have holes eaten in them, particularly the newly forming, more tender leaves.  There are numerous lady bugs present, especially down in the base of plants where eaten new leaves are forming.  A few aphids are on leaves with lady bugs in pursuit.  Any suggestions?  K.M., Irving.

A:  The holes may be caused by small caterpillars. If so, they can be controlled with trichogramma wasps or Bt (Bacillus thuringiensis) spray. If the pests are beetles of some kind, spray the plant oil products or the mixture we use for fire ant mound drench which is made of equal amounts of orange oil, compost tea and molasses. Mix 4 oz of this concentrate into a gallon of water. Garlic tea sprays will also help control these pests as well as help with diseases.