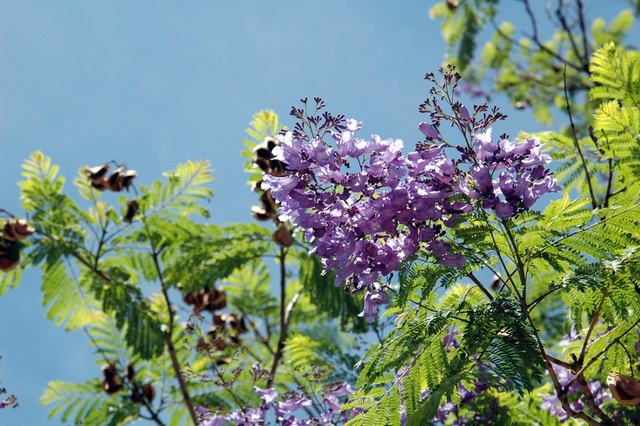 Jacaranda is a genus of 49 species of flowering plants native to tropical and subtropical regions of Mexico, Central America, South America, Cuba, Hispaniola, Jamaica and the Bahamas.

Habit: Shrubs to large trees ranging in size from 66 to 98 ft tall. The leaves are bipinnate in most species, pinnate or simple in a few species. The flowers are produced in conspicuous large panicles, each flower with a five-lobed blue to purple-blue corolla; a few species have white flowers. The fruit is an oblong to oval flattened capsule containing numerous slender seeds.

Culture: Planted widely in Asia, especially in Nepal. Jacaranda mimosifolia is quite common in Zambia, South Africa, Zimbabwe and Australia, and has been introduced to most tropical and subtropical regions to the extent that it has entered the popular culture. Jacaranda can be propagated from grafting, cuttings and seeds, though plants grown from seeds take a long time to bloom. Jacaranda grows in well-drained soil and tolerates drought and brief spells of frost and freeze. It thrives in full sun and sandy soils. Mature plants can survive in colder climates down to 19 °F; however, they may not bloom as profusely. Younger plants are more fragile and may not survive in colder climates when temperatures drop below freezing, so planting of younger trees in pots and moving them into a greenhouse for winter is recommended.

Uses:  Several species are widely grown as ornamental plants throughout the subtropical regions of the world, valued for their intense flower displays. The most often seen is the Blue Jacaranda Jacaranda mimosifolia (syn. J. acutifolia ). Other members of the genus are also commercially important; for example the Copaia (Jacaranda copaia) is important for its timber because of its exceptionally long bole.

Notes: The name is believed to be of Guarani origin, meaning fragrant.