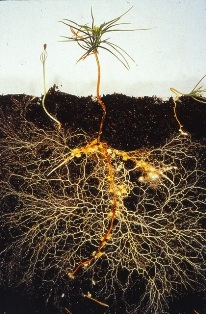 We all know plants are living things – but until now, we didn’t know they could talk, too. Results of a new study reveal that plants use an underground network of fungi to warn each other about insect attacks.

The study, carried out by researchers from the University of Aberdeen, the James Hutton Institute and Rothamsted Research, demonstrates plants’ ability to send warnings about incoming aphids to other plants connected to their network. Plants send out a chemical signal that repels aphids and attracts predatory wasps, who then attack the aphids. However, plants that were not found to be connected to the fungal network did not send out warnings to other plants after being attacked.

The plants use mycorrhizae to communicate, the study shows.

“Mycorrhizal fungi need to get products of photosynthesis from the plant, and have to do something for the plant,” John Pickett of Rothamsted Research told the BBC. “In the past, we thought of them making nutrients available from the roots and soil, but now we see another evolutionary role for them, in which they pay the plant back by transmitting the signal efficiently.”

This research supports previous findings that have shown plants communicate with similar chemical warnings through the air. Plants in the network were covered with bags to ensure they were not sending signals through the air.

“Our understanding of ecological systems has not considered the fact that plants are interconnected in this way,” added David Johnson of the University of Aberdeen. “It could have major implications for our understanding of how one organism affects another.”

Picket said the discovery could lead to growers using fungi as an advance warning system for their crops. The theory, he said, is to use a sacrificial plant at a distance from crops and if it fell under attack, it would warn the others, giving them time to build a defense.

Source: the University of Aberdeen, the James Hutton Institute and Rothamsted Research

Product with mycorrhizal fungi:  Bio S.I. Lawn & Garden Select
To discuss this newsletter or any other topic, tune in each Sunday 8am - 11am central time to the Dirt Doctor Radio Show.The call-in phone number is 1-866-444-3478. Listen on the internet or click here to find a station in your area.